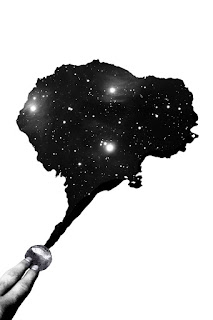 It's been a helluva year for Dial81 (aka Blair French) and Eddie Logix. The pair put out an ambitious collection of ambient work, as a producer-duo calling themselves BLKSHRK back in the autumn. The respective producers have been keeping busy with their own solo projects and various other collaborations with artists from around the region.

With the goal of being "genre-free," French curated a showcase of artists with backgrounds ranging from electronica to jazz, hip-hop to techno to pop/rock. French and Logix are just two of more than a dozen artists involved with this production. The theme here is attaining maximal amounts of sensory stimulation evoked from minimal instrumentation and sparse atmospherics. Loops, modulated-pitches, screwed-up rhythmic samples, trilling vibrato, trippy oscillations... transformative oscillations... Time laps...

Time laps captures that essence of losing yourself inside of a piece of music. And, I'm speaking to you, the listener. To where seven minutes pass but it feels like 30 seconds... Or vice versa. The marvel of experimental ambient compositions like these is that they can take the listener inside of themselves, in a very dreamy meditative state, and yet also spark a sense of expansive, enveloping space, a grandness and an airiness surrounding ones headphone-clasped skull. They call it dream pop because it defies conventional structures and thus sounds not of this world...And yet you close your eyes and see imagery that is eerily familiar, despite it's fantastical amorphousness.