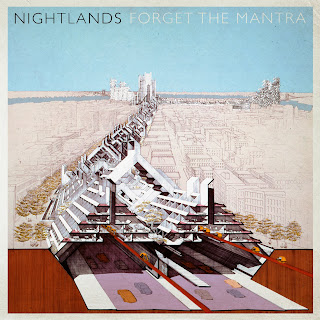 
Or, something like that... The aptly named Nightlands is Dave Hartley (the bassist from The War On Drugs) started out of capturing song ideas that hovered upon waking up. That's pure inspiration, poured out from the always swiftly disintegrating jug of dreamy residue. On their debut, Forget the Mantra (Secretly Canadian), the celestial reverberating haze of synthesizers are integral to such an aesthetic - but Hartley blends in some more earthy overtures, with warm, double-tracked harmonies, tingly acoustic guitars and some zesty horns.
Nightlands - "300 Clouds"
Also captured on this dusty dream: Hartley's own resurrected tape recordings, an audio journal set down by his dad during his days in the peace corps and a taped psychiatrist extolling upon ways to ease panic attacks.
The songs meander, expectedly, from lush, layered displays of soft sighing Americana onto star-surfing dream pop - into sparser, minor-toned haunts that evoke the uncertainty of, not only where these gathered/assembled/-re-assembled recordings may go, but where your own dreams themselves may lead...
Nightlands - "Suzerain (A Letter to the Judge)"
They play the Pike Room (Crofoot in Pontiac) on 1/27