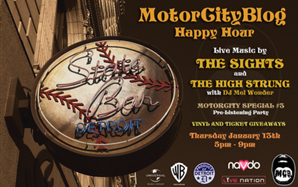 The industrious MotorCityBlog is hosting Happy Hour tonight (as they've been doing for the last few months now) - @ the State Bar inside Detroit's Fillmore Theatre.

DJ Mel Wonder will be providing a soundtrack full of soul, hip/hop and rock - while savvy rock institutions like The Sights and The High Strung trade sets.

This is a chance Vol. 3 of Motor City Special LIVE
as well as possibly win some Kid Rock tickets. Live Nation, Universal Music and Warner Bros are all offering up a bit of enticing swag via MCB... Come see what you can get. And come hear some music.

The High Strung are starting the recording of their seventh proper full-length, Possible-O-Impossible; while the Sights have just released a live 10" vinyl.