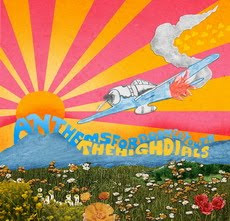 Through almost 10 years, three LPs and two EPs, the group has honed their blend of exuberant, shuffilng 60's-rock, with the hazy grace and bristling surf of shimmering psychedelia, driving beats and ear-worm melodies.

High Dials launch their 2011 tour here, in Detroit - Jan 14th at the Magic Stick. (Their first time back round here in a few years). They join Detroit's exemplary proponents of the guitar-impressionism, via the realms of trip-hop/shoegaze and driving psychedelic rock - with: Oblisk & Sisters of Your Sunshine Vapor.

DC caught up with singer/guitarist Trever Anderson minutes before he headed out for a DJ gig (oh for the chance to leaf through his crates, a likely odyssey of obscuro-pop, bubble-gum and murky pedal-twisted space rock...but that's just speculation). Anderson spoke about the band's latest album and where 2011 will lead them...(likely, SXSW).
Listen to the High Dials HERE 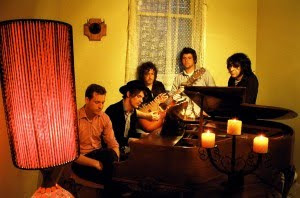 DC: How's everything going? You've gotten the record out - how's it feel? To, just, be done with it, or... what does this record mean to you?

Trevor Anderson:
We're at that weird point where we can no longer tinker with the album, it's out there in the real world. Reviews are rolling in and we're starting to see how outside perception clashes with how we see ourselves. That disconnect happens every time. Funny how I keep forgetting what it feels like till we get on the merry-go-round again. Almost two years of work gets reduced to a few reductionist compliments or put-downs and a grade, like a report card! That part of things is always an anticlimax. We agonise over these little details, shades and subtleties that get glossed over or ignored. Sometimes fans do pick up on the little secrets though, and that is deeply satisfying.
I feel like we always have mixed feelings about the finished product. There's no rest, the quest continues whether you like it or not. It has felt like that since I was 16 and recorded my first demo cassette. We're definitely proud of this record though.
DC: What distinguishes Doomed - what was the recording experience like?

TA:
How can I explain the ways we are without using cliches? For one thing, it is the most homemade. We wanted something a bit more lo-fi so we recorded it ourselves in an old building. Learned a lot in doing that. I think we captured a lot of genuine off-the-cuff performances. It's honest and real. I also feel like the record captures a piece of every part of our evolution. I hear bits of each phase we've been through. And I like that it's short. We say more with less on this record than we have at times in the past.
DC: So, after Doomed, what have you learned? What are you looking forward to?

TA:
A lot of our songs get better with age. We keep exploring them live, add new bits, start improvising in some sections. It keeps them alive. I'm really looking forward to getting to know our new album onstage. Mixing it up with the older stuff. Plus the band has changed again since we recorded, new rhythm section, so it's bound to be fresh.
More info
Posted by jeff milo at 1:43 PM