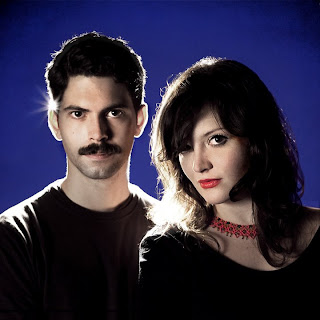 “I thought we were being put on.”

Singer Tamara Finlay says she and her cousin Jim Wiegand were dubious, figuring it was a cruel joke, maybe some mischievous blogger from his mom’s basement, when one day they got an email from Jack White (White Stripes / Raconteurs / Dead Weather), regarding their band, the Thornbills' and their music.

When the phone call came, Finlay said, she accelerated any small talk to find out what the deal was, (“because, I wasn’t entirely sure yet it was him.”) No big deal, said White, he just wanted to hear more Thornbills songs. “That is a big deal, Jack,” Finlay said, recalling.

Last August, the pair went down to to record some songs for White’s label, Third Man Records.

On January 8th, Finlay and Wiegand (now joined with a full band) perform at the Lager House to celebrate the release of their debut 7” single on vinyl.

The Thornbills songs are of a softly brushed, harmony- centric folk style that blending semblances both earthy and spooky and sewing some subtly poppy melodies through their minimalist voice/acoustic set up (with sparse percussion). They’ve heard post-show reactions/comparisons to famous folkies as Crosby Stills & Nash – to Peter, Paul & Mary.

“It’s been totally happenstance,” Finlay said, remembering their first proper 10-song set. “We went to the () Coffee Bean to play for some people, for our family and friends, to see if they dug it. And, we were just horsing around with ridiculous, corny covers, just ‘cuz we thought we’d just do it! It’d be an exercise in harmony and arrangement, so we just did some stuff, then somebody told us – ‘Hey, you oughta’ play an actual show…’ ‘Are you shitting me?’ ‘Yeah, do it, go into a bar.’ ‘Nobody wants to hear this.’ ‘No, no, do it, it’s really pretty, do it.’ So, we were encouraged by friends to branch out, and started with open mics.” 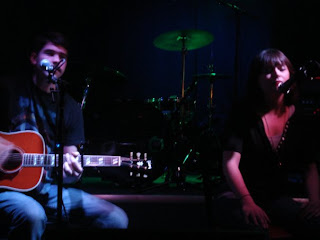 “We were surprised,” Wiegand said, “because, from the get-go there was a lot of positive feedback, from other than just family and friends…”

“…from strangers, too,” said Finlay. “To have people my parents’ age come up and go: ‘This totally reminds me of music from when I was growing up.” But, Finlay says next, the sound and songs have “definitely flowered out from there.” Their lead single on Third Man, “Uncle Andrei” is an ethereal waltz, bobbing and swaying in a chamber pop style, written for Finlay’s Ukranian grandfather.

The cousins spent most of their youths apart: Finlay, 31, was being raised by two opera singing parents- first in then in , while Wiegand, 29, spent half of elementary school in Europe, resettling in from age 10 onwards. They speak fondly of days spent at “Uncle Dave’s Farm, in Romeo” around ages 10-12, where they first experimented with making songs.

“There were no adults around,” Wiegand recalls, “It was like Lord of the Flies.”

“It was like Adventureville,” Finlay remarks, “there was a pond, all kinds of dangerous shit to play with, there were horses, we’d go running through the forest, hitting each other.”

“We would turn our towels into capes,” Wiegand nods, “make cardboard wings and jump off high things, seeing if we can fly.”

“And making songs,” Finlay surmises. “Pretending to be and Garth.”

“We changed the lyrics to songs we knew…”

“Hearts & Butts are shaped…” Finlay begins in the melody of the chorus from Pearl Jam’s ‘Elderly Woman Behind the Counter in a …’ – “shaaa-aaped the saa-ame.”

“…and not much has changed,” Wiegand says, looking over at his cousin, nodding and smiling.

The Thornbills- What Will Be

Respective divorces for their parents kept them a bit more distant through their teens but they started to reconnect three years ago, over music. Music (appreciation of it, as well as musicians/singers) is prominent through their family.

Young Wiegand was able to “grab my mom’s acoustic” as a twelve year old. It was a 12-string, but Wiegand, with his DIY/self-taught approach, cut six strings off of it and “beat the hell out of it, learning by ear.” His mom didn’t dissuade him, but she also warned that he shouldn’t expect to be “the next Eric Clapton or anything.”

Meanwhile, Finaly’s father, Gordon, was more encouraging: “’You can sing at the frickin’ MET if you wanna’” Finlay recounts, mimicking her father’s voice. Finlay’s father has had “a reasonably successful opera career,” performing with the Michigan Opera Theatre and touring (with the young Finlay accompanying his father on certain trips. “He teaches voice at and he started teaching me voice at the earliest age you could start teaching a kid to sing.”

Finlay recalls the day her father revealed to her that she “didn’t have an operatic voice” as a heartbreaking day. “As far as he’s concerned I have a ‘whisky voice.’” Finlay’s mother also performed with the Michigan Opera Theatre. She recalls her father nudging her, at age four, out in front of company, and prodding her to perform “Annie” tunes. When she ran away, blushed or crying in protest, he nodded, “…she’ll grow out of it.” He was right.

Another initially embarrassing anecdote included Finlay’s father visiting her elementary school to sing for the students (without telling her). From “The Cat Came Back” to a bit of “Largo al Factotum.” When the kids didn’t chastise her, in fact, when she saw them embrace him/enjoy the songs, she thought, as a kid, “that’s cool, maybe my dad’s okay.”

Finlay “always had music going on” around the house. She sang in Ukranian choirs (at one point achieving rank of Junior Choir Master). She said “Ukranian folk music” was integral for her inspiration to follow music. “I thought it was really emotive. There’s clearly a ridiculous melancholy about it, with the Russians and the Ukranians, they love melancholy, the crying-in-your-vodka kind of thing. But, also, incredibly patriotic, prideful type sounds. It’s really got heart.”

Wiegand, meanwhile, would disarm anyone expecting him to have filled his teenage days with Nick Drake, Decemberists or M. Ward – indeed… while at Saline High School, he started his first group (on electric guitar) with penchants for classic 90’s post-grunge alternative/metal, with Deftones, Boy Sets Fire and, particularly, TOOL. “I wanted to scream,” Wiegand recalls, “but it’s just not there. It took time to accept that…”

“…to find the softer side of Jim,” Finlay nudges.

With his dad’s side being non-musical, there was considerably less support or motivation for Wiegand to draw upon – so he relied upon Nirvana’s Nevermind as the key kick-in-the-ass he needed to go for it.

“So, after four, five bands, about five years ago I decided to go on my own. I thought we (the bands I had) were never on the same page. So, I bought the acoustic guitar and went on my own, writing and playing.”

After a year of forging his solo project, around 2006-2007, Wiegand started taking voice lessons from Uncle Gordon. After a while, he started understanding his own voice (particularly how it had changed through his 20’s) and “that head-toned opened up. Then…eventually, we had the idea: Let’s have Tammy sing harmony on one of my songs. It sounded so good that we were like: ‘Well, maybe we should write some more stuff…that had to have been…autumn 08.”

Wiegand said that coming into “folk was a happy accident. It’s not my intention, it’s just how it sounds. My influences, loving Pink Floyd and TOOL, I think the tone of those bands is what comes through; I’m pretty dead-pan in my singing and (Finlay), she brightens it up.” 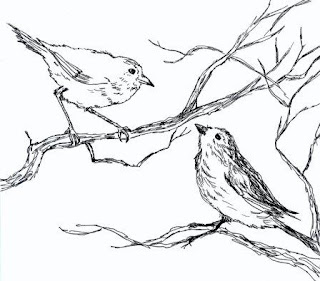 “I’m kinda closed off,” he says. “We’re alike, but we’re very opposite in a lot of ways. She’s out going, I’m pretty introverted.”

The songwriting has evolved to a more collaborative effort. Finlay began as an arranger and purveyor of sweet harmonies – but now she’s developing her own song ideas into the Thornbill-repertoire. Their single, “Uncle Andrei,” for Third Man, is good presentation of collaboration and of their complimentary ideas for song structure.

“I like how Jim took it and he gave it a much more abrupt pace, gave it a waltz beat; it’s weird, it’s cool, it’s spooky and it’s pretty. Haunting, yet really innocent.”

Third Man Recordings-
After White contacted them, Wiegand said, “that was the beginning of six months of furiously writing new songs and emailing him every few weeks: how’s this one? What’d you think of this one?’” Wiegand shrugged, that White still won’t reveal how he found out about the band. Maybe myspace isn’t dead yet??
In any case, they were invited down to record at White’s home, last August. “Obviously I was nervous,” Wiegand said, “’cuz for me, the scenario is something I’ve fantasized about, then…it’s actually occurring. ‘Oh my god, don’t fuck this up!’”
So this pair, still yet 'up-and-coming'...with a few live performances and no albums released to date, rode down to work with Jack White and Vance Powell. Sure they were nervous, but their work ethic already assured their preparedness. “We practice every day,” Finlay said. “Especially when something is vocally driven you need it to be tight, you can’t fall off. So, we were ready when we got there. It was pretty simple, pretty straight forward.”
And that was that. No big deal. White made them comfortable and the process/experience was more than copacetic. “We got right down to business,” Finlay said, “Jack doesn’t mess around.”
They regard that road trip (to ) as a formative moment, not just for their relationship, as family, and friends, but as a band. “Just the two of us, driving my dad’s mini-van,” Finlay recalls, “knees knocking and white knuckles on the way there.”
“The trip back was ridiculously relieving…” Wiegand sighs.
“I was staving off illness down there,” Finlay bemoans, “I was using an inhaler, I can’t believe I sounded any good. The whiskey and the nasonex got me through, fashionably.”
“She did sound great though.”
“I was dying, I could barely breath, the air is so thick down there. And then, chain-smoking on top of that. (White) told me, late in the night, he says, ‘That’s the best fucking take of the night and I’ve seen you smoke a pack of cigarettes today.”
“He told us we could smoke in the studio,” says Wiegand. “He probably regretted it.”
“…just a chimney.”
The Band-

The full band: “Awesome guys, good people that we feel good working with, which is important,” Finlay said. “We found guys who are great at what they do and bring everything to the table.”

Scott Allen (of Big Mess) plays drums, with based violinist adding more baroque-pop elements. For their album release show, Arun Bali (Saves the Day) will play bass.
"This is our first time ever playing as a full band,” said Wiegand, “so it’s gonna be new for everyone, including us.”
The Thornbills don’t have any solid future plans, at least show-wise. A tour would be great. More shows, in general would be great. But, they’d prefer to focus on writing, through the winter, and developing a full band and a cache of new, fleshed out songs.
“This wouldn’t work if we didn’t trust each other,” Finlay said, revering their bond, familial and musical. “Basically, our perspective is, like, okay… ‘kind…’”
“…and hopeful…and dark…”
“It can be dark, hopeful and dark, at the same time. We’re living it, we’re vulnerable to one another because we’re kind to one another. Not to say that we don’t’ clash sometimes. But, we’re both empathetic, so we know when we’ve slighted the other. We’ll just come back and…” (she puts her head on his shoulder, with puppy eyes), “…and go: aww, I’m real sorry.”
...And then get back to writing songs?
Wiegand: “…right!”