Download Chris' new single, "No Silver," from the forthcoming Salt Year LP, via his site.
~

Chris Bathgate’s forthcoming Salt Year LP covers much more than 365 days. One of Ann Arbor’s esteemed music mavens, the folk/rock singer/songwriter is transitioning from an “off-album cycle” to an “on-album cycle,” as he’s soon to release his first full length in four years, Salt Year. In the time between this album (coming on A2-based Quite Scientific) and 2006’s landmark gothic folk opus A Corktale Wake, Bathgate maintained a salaried job at the Neutral Zone (where he worked in music education and helped build, launch and operate a recording studio with a brigade of motivated teens). He angled for some touring, here (a bit nationally) and there (a bit in Europe) while also finding time to put out a limited EP (Wait, Skeleton). 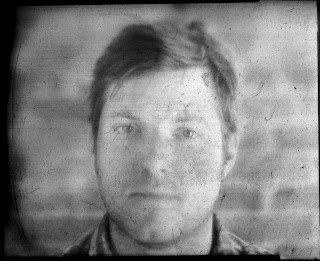 Now, moving on from the Neutral Zone, his musical engines are revving at the starting line of another tour and another album’s unveiling. Guitar in hand and a new band beside him, he gazes hungrily down that long familiar road he’s been meaning to turn back down and thus return to the romantic roaming minstrel / diy-touring ways he’s thrived on through this past decade.

For the last 2 years, Bathgate has essentially burned his candle at both ends, teaching youths about various aspects of music by day, then scrounging the fleeting hours of the night to write, spending days-off in Woodgrain Music with Jim Roll. He speaks of Salt Year as a document of about a two-year timeline, “while I was obsessively working on a project in a studio and obsessively working on a studio with a bunch of high schoolers. But I was missing the performance aspect.”

“Off-album cycle,” Bathgate repeats, “sounds light, but it’s a very heavy thing to say. I was recording, still engaged in music but it was frustrating to not be as active, like I was deficient on vitamins. I love to travel; I love to play music in other towns, playing music for people. That one-on-one connection, that’s where music really breathes, for me.”

He describes the slog of Salt: stressing yet inspiring, both trudging and propelling. Sometimes he’d collapse on Roll’s couch while hearing playbacks, “in and out of consciousness,” then later hitting fits of jumping and fist-pumped rejuvenation at the rewards reaped from capturing the magic he’d hoped for all along, (as some of these songs have evolved from previous versions or just traveled with him over the years).

Salt Year combines ideas of a year as “a place holder for a long time period” and “salt, like salt of the earth. It’s some definer of a year of struggle, which is actually longer than a year.”

The album explores the “weirdness” discovered when one analyzes one’s relationships and oneself. “The longer you know someone, the crazier it is and the stronger your relationship is; so many other things are unspoken between you, the subtlest thing can mean quite a lot, like a simple phrase or anything. Everything becomes more weighted because of all these shared experiences.”