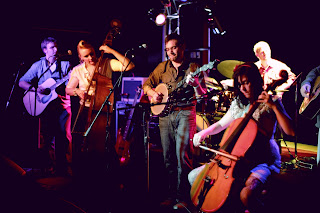 Continuing in a humble and haphazard showcasing of Ypsi/Ann Arbor bands... in a bit of admitted hyperbolic hailing for what seems to be a particularly active period for the area (and the edges of Washtenaw included).

LAKE FOLK:
Sounds: Baroque-pop meets Bluegrass on a moonlit road that boarders the fields of dreams and nightmares. A very rich sound with lots of character, sawing strings, banjo strums, and a strong, syrupy balladeer vocals blending country to blues, and beauty to gothic. Far from any mere grinning, earthy folk trip, they don't shy from flexing their spookier sides - with plenty orchestral accoutrements, cello, stand-up bass, and mandolin. The phrase they've coined is irresistable: "Roots Noir."
Erin Shellman (vocals/double-bass); Danielle Gartner (cello/vocals/mandolin); Eric Anderson (banjo/mandolin/vocals); Bryan Mayer (guitar); John Nipper (percussion).
Formed in 09. Based in Ann Arbor. They released the Means To An End LP in October.
"When we first started out we were mostly just getting together and jamming on Gillian Welch tunes," Shellman said, "or even folksy versions of jazz standards like 'All Of Me.'" Shellman, at that time, was reworking her father's songs (one of which ended up on Means) and those experiments "sparked us into writing original music."
Shellman said adding Nipper on drums last February brought depth to their sound, helping to make their live show more accessible "to noisier bar crowds," but, also, making it "more fun to play. We sort of rock a little harder."
Shellman spent the summer writing songs - of which Lake Folk is now fleshing out for live performances. These could materialize, some point soon, this year, as a subsequent EP. Later, they'll perform at Folk Alliance: "a huge folk/songwriter/indie -conference in Memphis for networking with musicians, labels and bookers." Also coming up for LF: "gangster rapping for the Folk the Police show on January 30th... tee-hee."
Talking about the bands' sound: "...our instrumentation is definitely folk. I mean, it doesn't really get more folksy than banjo. That said, a lot of our songs feature trombone and trumpet, electric guitar, electric bass and hard drums." Lake Folk blend elements of swing with folk and rock. In fact, the band went out of their way to stand out amongst a more folk-leaning line up, during their night at Mittenfest, bringing up the rockier elements and cutting their slower songs. "We all come from really different musical backgrounds and I think that comes through in our music."
"I'd say Arbor/Ypsi scene is variable and new and hopefully blossoming soon," Shellman said.
But, she added, bands playing/performing throughout what are two dueling college towns, can experience certain limitations. As is endemic to many music scenes, bands can wear of relying on their-friends-in-other-bands to be the core of support for live shows, which can (and sometimes inevitably) happen when your potential crowd (often students) can sometimes be hesistant to consistently head out for live shows, whether for their wallets emptied by student loans or maybe they're actually staying in to study. (Or, hey, some might not be able to get past that 21+ sign at the bar entrance). It can be a tough crowd to rack, Shellman said.

"But," Shellman said, "I think Ann Arbor and Ypsi have a history of supporting art and music and that the area can be a hub again..."

From here on out: "We're stoked about touring," Shellman said. Lake Folk is heading on a 10-day midwest tour this April, starting in Ann Arbor, down to Nashville and back. As the dead of winter passes, they eagerly await word back from the numerous festivals to which they've applied. "I can't wait for summer."
Lake Folk site