I guess I'm still a bit high from the 5th Mittenfest. I just feel compelled to trumpet a lot of the bands busying themselves throughout Detroit's western satellite. Compelled, for myself, and for some local readers, to move beyond calling it a satellite (of one town) and remember to crown it as its own complete entity. Michigan, really, is it's own verdant pool, all different styles, sensibilities and scenes sloshing together, and less something pushed or pulled by the whims of Detroit's gravity.

So, as a subjective documentarian who is all too aware of his own 78 mile round trip required of "Ypsi outings," I'm humbly attempting to document more of the bands out there, winding around South US-23 and 94. Here goes: 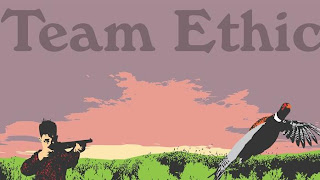 Sounds: Rousing indie-pop, with a strong rhythmic heart and the glistening harmonization of fuzzy guitars<-->whirring synth - It's a big, full sound, but instead of blowing it out or going down to much of a zealously fibrous "rawk" road, they never forget the sanctity of melody.

Formed in 2009, Team Ethic was started between college friends Abbot Daimler (singer/guitarist) and Joel Skene (keyboard/guitar/vocals) along with local band journeymen Ed Golembiewski (bass). Daimler's resume: Slow Dance Revival, Long Whisker). Skene's (Lone Wolf & Cub, Fields of Industry). Golembiewski, meanwhile, played in Invader, Boywife and, now, Fields of Industry. After over a year of writing (with a revolving drummer), they settled the line up with Carl Greene (of Royal), started performing in September and released a debut EP, The Great White North.

Skene said Great White was just supposed to be a demo/sampler for venues. "But Brandon Wiard at Pretty Suite Recordings offered to help us out, and the man can't seem to do anything half-assed." Pleased with the results, (it retained the vigor of its circumstances, having been recorded live in one night), they then had Jon Visger (of Mason Proper) master it.

"One thing that really unites us," Skene said, "is how much we all love Ypsilanti." Each member has bought a house in the area. "We feel that Ypsi is a lot more than a poor man's Ann Arbor, and we all actually prefer it (to AA). "There's a lot of young, post college-age people around and there's a great art and music scene here that's small enough that you feel like you can make a dent... There is a certain quirkiness to it that is really fun; I think it comes from the feeling, here, that there are so many possibilities and people are willing to just go for it."

For a non-musical example, Skene refers to the Shadow Art Fair community with it's costume ball/midnight parade centering around a demonic/mythological figure named Krampus, tagging along with Santa to punish bad kids. He also gave a nod to the eclectic range of performance artists enlivening Ypsi's Dreamland Theatre.

"Ypsi," Skene said, "is similar to Detroit in that the whole city can be an open canvas."

Skene remarked over another fantastic Mittenfest, expressing Team Ethic's shared happiness that former Elbow Room operator Andy Garris has set up "a great space that feels so cozy and welcoming," via the still-new Woodruff's.

"The scene in Ypsi has been turning it up a notch recently," Skene said. "Secret Twins, Lightning Love, The Juliets, Swimsuit and Drunken Barn Dance have really taken off, (even though some of them have moved to Detroit or AA), as well sa some acts that have been going strong for a while like Chris Bathgate, Black Jake & the Carnies, Jim Cherewick, and Todd Osborne. It's nice to have the Peters' brothers (at Ghostly & Qui Sci Records) be so involved in Ypsi and I think Team Ethic and our good friends Long Whisker want to fill the role of making lyrically smart, catchy pop rock. We've seen the crowds growing over the past couple years and the interest in music is definitely rising here."