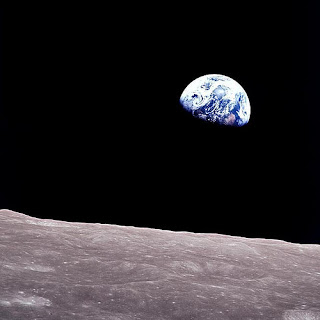 Jon Berz has kept himself busy. A multi-instrumentalist and songwriter, Berz has been banding around the Metro area for ten years - most recently with the now defunct Blase Splee.
Over the years, Berz, often set at a piano or synthesizer, has continued to write on his own, developing an array of material over the last few years.
Listen to some demos
His new project is one that hasn't quite taken full shape yet - and likely won't settle into one anytime soon.
Songs From The Moon will, by design, in a state of varying flux; it will be "more of an orchestra" of recruited collaborators who align for somewhat hurried rehearsals to fully flesh out the more than a dozen recorded demos Berz has created. Synthesizers, acoustic guitar, drums and dual electric guitars will dress the soundscapes - with half (or so) of the arrangements likely staying instrumental. The synth could give it a spaced-out, atmospheric vibe, but the percussion and piano will keep things shuffling forth and the acoustic guitar will keep bring its earthy tones to warm things up.
But, really, it could be anything. Berz revels that it can, and likely will, become as weird as it can be - not shying away from darker dirges, nor ambient lulls, nor guitar swaggering crescendos. Whatever potential extreme: a haunting, fuzzed out cathartic ballad or a tightly flexed, jaunty pop pirouette - said-extreme will be explored - by whoever happens to be making up the team of explorers for that particular batch of songs.
Berz plans to release a series of singles and EPs, free, online, over the coming months. Each time the band is about to perform, he'll lasso the group (which, for the most part, will likely stay the same, save for a switching in-or-out of one to two new players from time to time), to practice a bit, finish the songs, put em up online, free (as a sampling) that will lead into a live show. 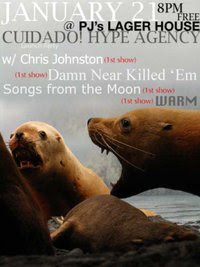 Their first show, ever is January 21st - at PJs Lager House.
SFTM aside, this is, above all, a launch party for a new Detroit-based promotional company: Cuidado Hype Agency - (started by Scott Boyink--of the now departed Amino Acids and Janel Boyink). Their focus: "short term solutions for local musicians and promoters on a referral basis."
For each band performing Cuidado's Launch Party (1/21) - it is their first show. These are all debuts!
Look into:
Yes No Wait
Damn Near Killed 'Em
With Warm
& special guest Chris Johnston
Can any scenester fathom how refreshing this all is? A completely clean slate - to, in the truest sense, discover bands... while they're likely still a bit raw, but still - no preconceptions.
~
Ed.'s note: Berz' Songs From The Moon, just like his Real Detroit Column, Notes From The Underground, recalls a literary observance of all things from the outside. He references Twain's Letters From The Earth, with Satan essentially reporting to god on how concernedly zany things have gotten on this planet of "curiosities." Songs, as in compositions, almost journal entries - or, like Dickens' early career, an episodic set of serials. Communique from the moon, observing the earth... in song.