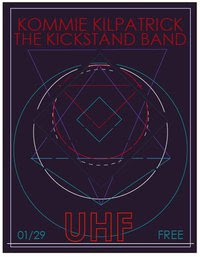 Kommie Kikpatrick, Detroit's five-fingered hardcore-punk hay maker, have a new EP (on Cassette) - Too Many Dudes - that they'll offer alongside their slightly more poppy, or at least more aerodynamic-and-post-punk-leaning comrades, the Kickstand Band (with The Kitty Kat Sessions). Get the skinny from Gold Tapes' blog.
And hear an MP3 from Kickstand Band here. 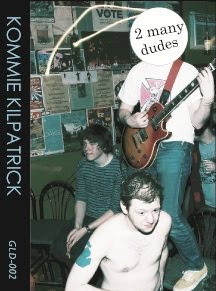 Kommie Kilpatrick seem to treat their songs as though their holding their breath the whole time, while punching bare knuckled through 2x4's and stomping on hot coals...or maybe it's more of an Indiana Jones having-to-outrun the giant boulder type of thing. - It's all this clenched, grimaced, fuzz-fucked, drum-blasted, 97-mph-riffage with hyper, yowling vocals. A white-light spark of energy that can only be let out of its cage for a brief period before causing too much damage... Or maybe they're actually into the whole brevity thing, man.

But there's love songs here - sure, they're about drunk boys, or about chasing that potentially mesmerizing young beauty your innocently pursuing on your bike on a Friday, ...and sometimes they're about not actually wanting to have romantic relations and, maybe, just stay in and watch the Simpsons.

At a five piece, with two guitars, bass and drums, the sound is full and, if one digs deep enough into its gnarly, mosh-elucidating grooves, can find some fine musicality blended into all the madness. - Psychotic surf rock, buzzsawing hardcore revivalism and irreverent, juvenile lyrics. Fun, fast, tumultuous. 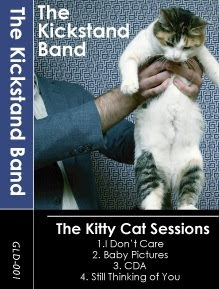 Kickstand Band, meanwhile, set beside the tazmanian devils described above, are certainly pop - but more the realized paradigm of indie-rock ideals: delectably melodious, toe-tapping, and hooks so catchy they could yank you off your chair, yet rendered a more caustic sheen of blurred, jangled riffage and tinged with a keyed-up air, propelled forward by antsy rhythms.

Moments of their tunes may flirt with that almost-cutesy, daydreamy, surfy pop that's been mined by Best Coast types...but their edges are rougher, their tones explicitly less syrupy...in fact, that guitar's wrung to a tinnier/less-reverb-soaked, twangy gnarl, blurring by in fits reminiscent of post-punk pioneers like Wire. The drums facilitate a perfect middle ground between the tribal one-two punch of punk ("I Don't Care") to the more waltzy, shuffling style of pop/rock ("Baby Pictures") and that wavy bass struts with enough pizazz of it's own...think, not-quite-a-Pixies-thing, no no...but, almost, sometimes like a Young Marble Giants' type groove (free of any languor). Add all that to the immortal charm of well-matched boy/girl harmonized duets and their ability to weave indellible melodies -

"Still Thinking Of You" has been stuck in my head for two days. And it'll be that much more irksome when, after you finish listening to it on Gold Tapes' release, you'll have to wait an extra 30 seconds for the spools to rewind...


And you can hear these songs live, from both bands, free, at UHF - 4pm - 1/29 (...on Washington, in Royal Oak, a bit before the railroad tracks).
~
Gold Tapes was started within Kommie Kilpatrick, just a little while ago, after the band realized that, even though they'd been releasing all their stuff on cassette--that people were still buying it and seeming to dig the format. Why not start a label? Why not start recruiting your close friends' bands as the base for a roster?
Up Next: Deadbeat Beat's cassette.... more info
Posted by jeff milo at 2:42 PM