Now, with Valentine’s Day tomorrow, I realize that the “holiday” is advantageously scheduled, right here in the dead of winter. Singing the blues from busting our backs at shoveling, our fingers cramped, lips chapped and our toes frosted as we wait for the bus or for our car’s to warm up. We’re in need of an amorous day that encourages embrace and exemplifies love…
Or, at least, a cup of hot cocoa. 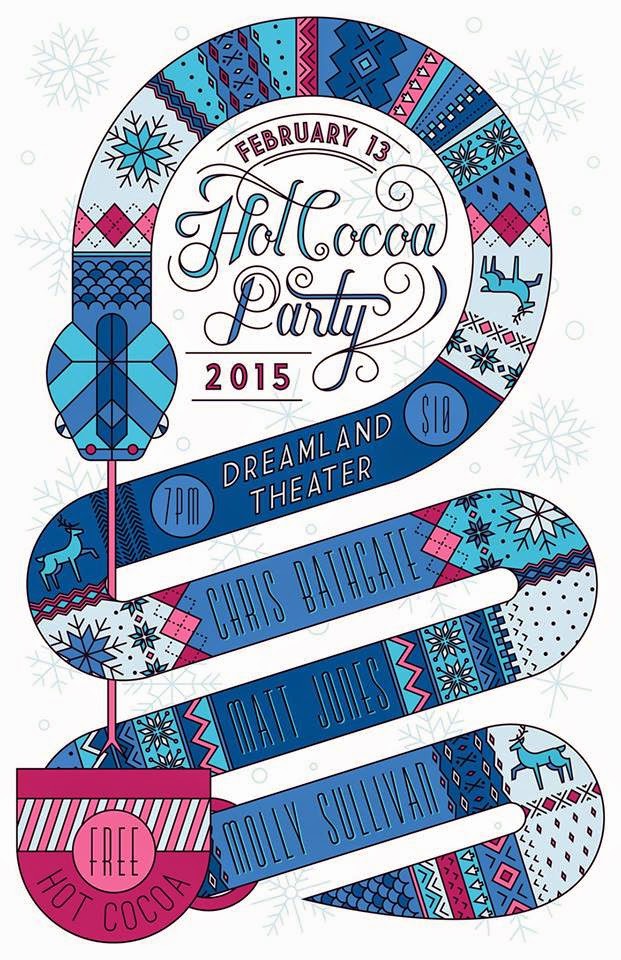 Hot Cocoa Party
That oughta help you blow some steam off…right? I mean, you don’t need anyone as your official Valentine, you could just come and chill (…or thaw?) out with some friends at the Dreamland Theatre, whilst sipping some complimentary hot cocoa and enjoy the latest live recitals of works by Chris Bathgate and Molly Sullivan, a pair of singer/songwriters who’ve been touring and collaborating throughout the later part of last year and the early part of this year. Pastoral folk songs placidly plucked and evocative tones gnawingly wound and weaved under darkened lullabies heaved in whispery, heart-in-a-vice voices; a formidable duo of song stylists…

But then you’ve also got Matt Jones on the lineup as well, with a higher-registering quaver over a busier finger-picked guitar style inclined towards séances of Civil War ghosts.

Absofacto (New Music)
Meanwhile, Jonathan Visger has new music out this week. Mr. Visger is best known, recently at least, for his experimentations in ambient pop percolated by a rustled hip-hop percussive arrangement via Absofacto as well as a more exuberant indie-pop inclined dance-electronica project with Brian Konicek via Hollow & Akimbo.

Here, with an understated bob-n-weave beat set to a funky blend of guitar/brass samples, Visger’s breathy vocals smooths its way through a surfy chorus , converging pianos, synthesizers, blippy loops and his own multi-tracked harmonies into something comparatively warmer and iridescent despite the heavily electronic aesthetic.
Absofacto: “Dissolve” - http://absofacto.com/dissolve

Black Jake & The Carnies
Rising statewide brewery chain Hop Cat recently opened up a Detroit location and has since been making a concentrated effort towards establishing its performance space (The Huma Room) as a go-to spot for local music – including bands from Washtenaw.
The ever vigorous , ever quirky, ever theatrical Black Jake & The Carnies will tear through their set of punk-inspired bluegrass for the Bad Luck Lover’s Ball, accompanied by Lil’ Darlins Vaudeville and The Webbs.
FRIDAY NIGHT - Black Jake & the Carnies at The Huma Room (Hop Cat Detroit – 4265 Woodward Ave) w/Lil Darlins Vaudeville and The Webbs / $10

Human Skull / PiNG PONG
This isn’t “new” music like the Absofacto link above, but I still wanan spotlight the Ann Arbor trio Human Skull, who performed at the UFO Factory in Detroit last week. I found this surging, sludgey surf-punk to be effervescent – a kind of: just-what-I-was-looking-for revelation of 2 ½ minute shredders that are exploding off of the players in a fully realized form, not over thought, not over played, but cool and quietly confident. Their Demo EP came out in the late summer of 2014 which makes me way late to hop on the bus, but still…

Human Skull are performing at this weekend’s Ann Arbor Blast at The Blind Pig with Super Thing,
Rotokiller, King Under The Mountain, Bangarang and PiNG PONG.

The 7 th Annual Bloody Valentine
Perhaps breathtaking folk songs or tilt-o-whirl punk-rock isn’t what you’re looking for this weekend. How about some burlesque? Some quirky, engaging vaudeville? Maybe a bit of magic and some post-apocalyptic clown makeup? Come to the Crossroads Bar and you’ll encounter an ensemble of talented burlesque & side-show style performers, along with music by The Devil Elvis Show and records spun by Ayinde Audio.
FRIDAY NIGHT - Bloody Valentine Variety Show at Crossroads Bar & Grill (517 W. Cross St, Ypsilanti) $7