It’s one thing to play the string band jams of the folk and Americana traditions… The Appleseed Collective enlivens that music and gives it soul.

The Ann Arbor quartet's percussion ranges from washboard clacks to stand-up bass slaps, hand claps and chiming desk bells, their backing vocals harmonize with a hearty heave under the lead singer’s honkytonk-ish warbling, while a splendid melody is lovingly sewn through an interweaving thread between the guitar, mandolin and violin.  It puts the waltzing spirit in you, makes you want to hike along a woodsy riverside, and incites you to sing along…

This Friday, you can catch The Appleseed Collective at the North University Stage for the 2015 Ann Arbor Summer Festival (8:30 pm).

While the Appleseed Collective’s signature style is exemplary of the swinging string-strumming folk music that embodies much of this annual musical celebration, they are just one of dozens of bands scheduled throughout the month of June, with performances hosted at a handful of stages at the Top Of The Park (N. University, between Fletcher & Thayer in Ann Arbor).

Other features of the AA Summer Fest include an all acoustic stage, a KidZone Tent and screenings of feature films like Wes Anderson’s The Grand Budapest Hotel, E.T. and Ghostbusters. Other local folk favorites to catch include October Babies and Fangs and Twang (June 17), Timothy Monger (June 18), Misty Lyn and The Big Beautiful and The Ragbirds (June 23) and many many more.

Earlier in the year, The Appleseed Collective released a definitive Live Album from a particularly spirited performance at The Ark in Ann Arbor. For more sonic samplings, follow: https://theappleseedcollective.bandcamp.com/album/live-at-the-ark 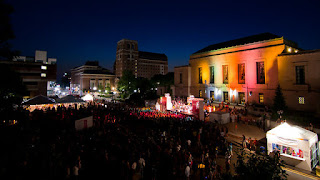 The Ann Arbor Summer Festival’s Board, Management and Consultants have continued to present this community with an engaging multi-arts festival celebrating both local culture and artistic talent from around the world. The Summer Festival’s mission, a partnership between the city and the University of Michigan for more than 30 years, has always aimed towards enriching the cultural, economic and social vitality of the region.


For more information: http://a2sf.org/about/program-history/
Posted by jeff milo at 12:12 PM