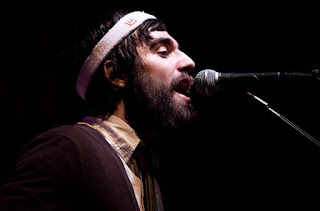 Here's a song he wrote:


Ryan Cox isn't a musician... Even though he plays guitar, piano, drums, bass and sings in multiple octaves, harmonizing with himself. And, he isn't a singer, either. Or, so he'll claim. He doesn't consider himself anything like the typical conception of a songwriter, producer, musician or singer...even though he's been honing those crafts for several years now.

"It's a Frankensteinian way of building songs..." Cox said. "It really is much more of a mad scientist tract...I patch things together, recording the parts live and then piecing them all together."

The Good Things is a band, or at least I suppose you could call it that. You'll likely never see them perform live. And by them, I technically am only implying Cox. The 28-year-old writer, teacher, jack-of-all-trades-type, grew up in Michigan and has been spending the last few years taking deep dives into his soul, digging through his past to mine some profound revelations that become rendered into pop songs.

It's a sense of irony that draws him to an ebullient pop song, bursting with its major keys and jaunty tempos. "A lot of the songs, textually, relate to things most often construed as 'downers.' Major keys are typically associated with happiness. Bringing them together is cathartic in a way; it offers perspective. Breaking up can feel like the greatest tragedy ever, but looking at the event from another perspective might lead to a happy sounding sing-a-long, like 'My Wife.'"


Though he's recorded (and re-recorded) a fair amount of songs that feature a complex overlay of vocals, guitars, drums and myriad homespun effects, he's never had any formal training, neither in instrumentation or sound engineering. And yet, these songs have become like his great life's work, a sonic sculpture that he could possibly whittle away at forever, if no one stops him (...if anyone could stop him).

"I have a very complex relationship with recording," Cox says, not specifically referring to his unique methods, but more to the emotional rigors it rolls him through. "A lot of it is driven just by the need to get stuff out of my head, so that they can stop haunting me. It's definitely a therapy. Every record is...like, if you were to dig into them deeper, you'd really just be reading my memoirs."

His methods manifest in extensive and exhaustive sessions, recording, re-recording, adding, subtracting, adding....adding.....adding....and, most of all, figuring it all out on his own, finishing up recordings in a basement, in a closet, in a bedroom, in a laundry room, with his own sound-proofing, his own mics, his own shitty drum kits and his own protools. He already has three albums imagined in his head. One a hallucinogenic Roald Dahlian-meets-David-vs-Goliath fantasy trip, another as a 1940's radio play about a character named Spooky Charlie. They aren't fully written yet or even recorded, but they're in there.

This album isn't a debut, but it still feels like an introduction. Unlike the next EP and full-length that he's currently working on, I Am The Good Things features contributions from Joel Hardin, John Morales, Joseph Krawczak, and Lisa Martin, with one track, "Wasting Time," recorded with Jim Diamond.


I Am The Good Things has been in the works for a few years, now. The delay has not been entirely due to Cox's half-meticulous/half-haphazard process; it mostly ties directly into his atypical motivations for making music. You see, Cox isn't going to tour, he isn't going to play the Lager House or the Loving Touch and he isn't going to tweet about his music or make a music video. He doesn't want that idealized/coveted lifestyle of touring the country and living off his music for the rest of his life...

The goal, if you'll call it that, is to "quit doing all the other crap that I do that I don't wanna do...which is most things..." as he says.

Now, that sounds familiar, but it's a little more complex than that. Cox's real ambition is to apply to the University of Michigan Writing Program, a terminal Masters of Fine Arts degree. The hope is to sell enough  music online so that he can eventually pay off the rest of his student loans and forge ahead. Not that he has ulterior motives, so to speak, its just that, as I said, he wears a lot of hats. Those hats have caused the delay.

One of those hats Cox wears, from his various degrees, molded him into a writer, a storyteller... Cox has an associates degree in Liberal Arts and Cinematic Arts and a bachelor's in English with a minor in Film Studies. He's got his eye on being a professor, someday. But first things first: he wants a Masters in Creative Writing. Hence, this music...these therapeutic three-minute bursts of sunshine-soaked Brit-pop revivalism...could be a way to get closer to that academic achievement.

He's also a teacher. He tutors regularly and works with local colleges. He's also consistently writing and editing both his own work and the works of others, coordinating a fledgling writers community through monthly or bi-monthly short-story competitions.

Its just that lately, his storyteller-hat has been utilized to foster these vivid and wildly imaginative ideas, veiled metaphors for his own life experience, in song-form, spanning a blend of genres from fantasy, to sci-fi adventures and hard-boiled, film-noirish mysteries. These piano and guitar-centric, hand-clap heavy pop ballads that he's working on are intricately sutured into unconventional song structures with a dazzling, sometimes dizzying patchwork of polyharmonies, doubled drum tracks and detached, tempo-defiant bridges evoking an aural sense of a song within a song. (Or, sometimes, that you are hearing nine voices at once... Wrong, you might be hearing 18 or 19 voices...)

"The music thing is mostly therapeutic," said Cox. "I can't imagine ever making enough money to even make a dent in these student loans, let alone finance any academic future (through music). It would be nice to make enough money from each record to make the next record. Self-sufficient. Since I'm a garbage-popper, my records aren't very expensive to make. They're just time consuming. However, I have been thinking more and more of trying to monetize—or finding someone to try and monetize—my music. It'd be great to find a following of 10,000 people I could sell a $7 record to every other year. I just don't think that is realistic for me and what I do."

The hope is to focus on multiple projects. The conundrum is how to do that in a world where listeners are opting for a streaming-consumption of their music instead of direct support of independent artists. Cox's quirk, and he has many, is that he doesn't just want to do music; and it's not merely a springboard for his admittedly wider-eyed future plans, but just another form of creative expression.

These songs are the movies in his head, made manifest as though his voice and his hand-claps and his strange scraping sounds of the guitar embodied the smoky gray light of a projector emanating the images and frames of his psychosis, his soul, his life story, his sense of humor...all of it, crammed together in awkward grace, in the form of exuberant pop music.
Because Cox wants to focus on several other projects, including workshops with young artists, young writers, young aspiring filmmakers. He wants to foster that writer's community that's taking root with the Drabble competitions. He just doesn't want to be bored. And, in a way, to only just play music, week to week, show to show, touring, recording...that would be less fulfilling or, rather...boring, to Cox.


Milo: Do you think storytellers are artists?

Milo: Would you consider yourself one?

Cox: Nah, that's a trick question. That's fucked up! (laughs) Alright, I guess I have to use the A-word...I don't feel like one. I don't consider myself an artist in terms of what I'm doing...

Milo: And yet if you make an album, it's a work of art

Cox: It's got to be...and also, if it's listed on iTunes, it would say "Artist" as a category. But you know how I am about words and titles and classifications...I don't fit in that world. And I don't see it as a craft...Man, now that you've got me thinking about it, I feel existentially concerned...

Milo: Maybe don't question it. Maybe just go with what works best for you...

Cox: Still trying to figure out what that is...

Milo: What about performing or sharing these songs

Milo: Do you care about an audience?

Cox: To an extent, but more so, I care about people...

Milo But what is this work saying to someone...It will engage an audience.

Cox: I think I can be selfish about why I do this. It's therapeutic. It's haunting me.  I don't have a choice in some ways. I'm bothered by a melody or something that just has to come out. But I'm considering this financial perspective to music, lately, the need for a target audience...If I'm able to make a record every other year and sell it for $5 per record...that's still plenty then to upgrade toward the next record and still be able to teach in the summer and the fall. I have to consider an audience, now... As far as them getting what I'm intending? It's more just wanting to get it done for me, so it won't bother me....Who am I writing for? I'm not...looking to be commissioned for songs. I'm just looking to be not-bothered by them. Taking a noise and turning it into something you can enjoy for the rest of your life is a cool process!

Milo: What about sharing this enjoyable experience?


It is weird. Because I think he might be a savant, a sure-fire pop-song virtuoso, albeit achieved through seemingly implausible, long-way-around implementations of both whimsy and wisdom... And yet, he isn't going to tour and...these songs won't be on your Satellite radio stations, despite how enjoyable they really are... Thankfully I Am The Good Things IS coming out, some way or another, and these songs can be enjoyed.
Posted by jeff milo at 3:48 PM