“We don’t want to go up there and be just another four boring people playing rock music…" says Moonwalks guitarist Tyler Grates. "We’d rather be more memorable than that and maybe inspire them to make their own music.”

But he says this so even keel, like it’s just expected that that’s the natural aspiration for the Moonwalks’ type of music, with its unique energy and angles, both on record and on a stage. Even to this point, having garnered a notable amount of local buzz for their blend of a fuzz-stormed, pounding hard rock and mystically-murky psych-pop shimmy, Tyler still want to take things further. “To just excite (the audience); that’s the whole thing.” 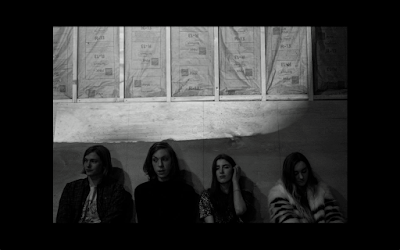 “It’s not like we’re trying to cater to any sort of audience or try to make people like us,” drummer Kerrigan Pearce says. “We just don’t want to play shows where people are bored. It’s always more fun when a crowd responds.”

“People were freaking out the last time we played Elijah’s,” recalls bassist Kate Gutwald, offering it as evidence of their progress towards said-responsiveness. “I’ve never seen people mosh to our songs before…”

“Sometimes I can get nauseous right before a show,” says singer/guitarist Jake Dean. “Until we start playing. And then, depending on if it’s a good show, that feeling right after the last song, it’s the best feeling…”

Pearce says she feels the same way; that she digs the adrenaline that kicks in right before that first song hits…

The Moonwalks blend all the intriguing elements of surf and psych as well as some old time rock boogie and some grimy garage stomp: from the golden chiming tones of those lead guitars cascading over low, fuzz-splashed bass lines to the minimalist percussion punching straight to the heart with no frills, something heavy yet nonetheless hip-shakeable, while the vocals, whisked by a dazzle of echo, croon all coolly in the verses and yowl with raspy ardor at the choruses.

Oh, and Grate's solos? Those are witchcraft, man.

Sometimes the bedrock of the group’s sound is purposefully aerodynamic, like a pared back garage rock coaster, those that those sleek, slithering guitar lines can really fill the rest in, whipping their way across this intentionally cinematic soundscape like some indigo skyline blazing the peripheries...

It’s something like that...theatrical, as Grates would put it. Or, as Gutald puts it: "Just try to keep it simpler so that the guitars can show off more..."

Moonwalks could be the soundtrack to a lucid-dream-wrought Western transposed upon a post-apocalyptic desert planet where you’re cruising in a dusty Roadrunner with Link Wray, The Cramps and Brian Jonestown Massacre in the backseat.

Their debut EP, recorded with Jim Diamond, is streaming on bandcamp:  http://moonwalks.bandcamp.com/

And, their summer tour kickoff is next Thursday (6/11) at Lo & Behold! Records and Books, starting after 9 p.m. with The Deadly Vipers.

Grates and Dean started jamming together about two years ago. The pair had just gotten out of high school (Grosse Pointe South), but each had already been playing music for several years. The two guitarists started a group called Band Of Newman (...playing off the quirky pianoman balladeer Randy Newman). That group wound up breaking up. "It got boring," Grates said. "I just wanted more sound, more droney-ness, more excitement!"

Gutwald grew up playing classical music on the violin. She tries to avoid the self-trumpeting qualification of saying she's "...classically trained." In high school, she learned how to play guitar, but she actually learned the bass for this band, having never picked it up before.

Kerrigan, meanwhile, plays drums (with notably upticked gusto) for The Deadly Vipers. She taught herself how to play drums from listening to Jon Bonham on Led Zeppelin records (along with some Sabbath and Velvet Underground). To suit the particular guitar-centric psych-rock sensibilities of Moonwalks, though, she likes to think that she's more Moe Tucker-ish with Grates' songs (while she goes more toward Bonham ballistics with the Vipers).

Now, I already used lots of purple adjectives to evoke their signature trippy-rock whirls...whilst also name-dropping lots of other subjectively chosen sonic reference points. But, believe it or not, these young talents don't even count Brian Jonestown as an influence... That's just what my ears heard. Now, Randy Newman's name was sincerely dropped during the interview, as was KISS and T. Rex. Dean used to listen to cassettes of Fats Domino, Chubby Checker, Bo Diddley and Howling Wolf, while Grates talks about Leonard Cohen and Captain Beefheart.

And lately? Lately it's Devo, Donovan, Todd Rundgren and...Modern English? Yep. Which speaks to their inclination to put on an energizing live show; comparatively young as they are, they're soaking in so many different and stylistically disparate influences, yet each of those names scrolled above share one thing in common: presence...presentation...stagecraft... Theatricality! Excitement... That's what it's all about.

For now... the band is heading out on the road, hoping to fill up most of their summer with extra tour dates. They have a full length album completed, but no set release date, as of yet. Grates said to expect more instrumentals, more layers, more droneyness...including a 10+ minute jam, Zapp-ishly titled "Cream Cheese Ashtray."

"I like the tracks, I like how all the songs are sequenced," Grates said. "I think there are a lot of hidden things in there that people will have to listen for...which is good when you really get into an album and wait for certain parts to come back around..."