Been meaning to get an interview with The Landmarks up here... This seemed as good o' time as any; here goes: 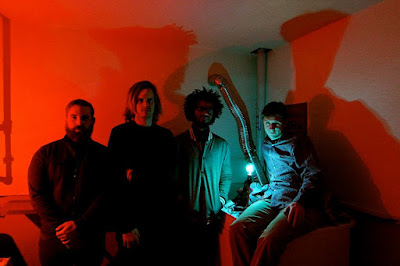 Now...think back to the turn of the century… Indie rock was going through a strange new transformation. The cool tantrums and drawling croons of a garage revival were starting to fuse with the more complex phrasings and acrobatic percussion of space & math rock. Then, with synthesizers surging into the equation (and a tacit ingrained urge to find some cheer or, if not, some hope in those bleaker early years of the 21st century), a danceability began forging itself to the feet of this new hybrid sound…

So this new sound, a crashing and dynamic rock energy, catapulted by soaring guitars through glitzy clouds of synthesizers and sweetened with melodies that knew just when to hit those provocative minor keys, began hitting the ear of The Landmarks during their most formative listening years, just on the cusp of college. It wound up significantly influencing the music they'd eventually start writing in 2013.

Guitarist Jack Uppling acknowledges those origins: “Yeah, the Strokes, Radiohead, Phoenix and Julian Casablancas’ solo stuff are all artists that we all liked. The Killers were definitely an early influence…”

The group came together two years ago in Ann Arbor. Uppling followed the same approach as The Killers and went with a Craigslist ad to get a group together. The urge, for Uppling, was to finally a legitimate, longterm rock band. Each member has been playing music for several years (or longer) but none of them committed those talents to a full time group such as they have with the Landmarks. Uppling, along with drummer Martin Maginity had at least been in a group before but this would be singer Laja Olaiya and bassist Colin Freeman’s first real go at it. The band formed at Freeman’s house on William St in Ann Arbor. Maginity and Freeman are Michiganders born and raised, while Olaiya and Uppling came here from Chicago.

So, listen closer to the rigid/smooth guitar interplay, the kinetic beat and the varyingly swaying and surging vocal delivery, and you can hear elements of new wave pop, digging back from the Phoenix influence and deeper into the roots of a rock sound with a bit more brio to it, ala The Smiths, or The Cure or even some New Order (with those dazzling synths). “It’s hard to choose who to list…” Uppling said.

And Olaiya’s bringing a contemplative poet’s side to the verve of his melodic lyrics with Morrissey-esque musings like: “now...I’m struggling with my refracted truth / I’ve compacted subtle ties into a mine of diamonds…” Not bad, for his first band…

“We all kinda do our own thing when it comes to writing the songs,” said Olaiya. “But, when we all meet up and put it together it can be pretty special.”

Olaiya considers that period, early on, when they fell into a workable groove, in terms of collaboratively composing their songs, to be a particularly formative moment for the group.
But, Uppling recalls something else that helped them bond, the inherent energy from a crowd, an energy that they could stoke with their songs but then also feed off of, a primal kind of dialogue between performer and audience. And then, maybe the cops show up…? “We played a Co-Op’s house show in Ann Arbor for hundreds of kids. They were really into it. But, the cops came after we finished our last song… Still, that night was one of the first times we really thought we had something.”

Two years on, the band continues to challenge themselves to write a better, tighter song each time. “Every time we finish a new song,” said Freeman, “it seems to feel different or feel like it's from a whole new band, which is good. We’re always experimenting and trying to get the best out of every song.”

Uppling said that they’ll even play the music of one song and have (Maginity) play the beat for another song, just to try a mash up of their original music. That said, writing songs as a band succeeded in bringing them closer together as bandmates and friends and even fed into a new found confidence “and overall great vibe and timing…” Maginity said, that wasn’t there before.

The Landmarks recently recorded four new songs to follow up Schisms but they’re going to take their time a bit. The plan is to release each as a single, one at a time, streaming online. Then, later in the summer or fall, bring all seven songs together to compile a proper full length debut for an audience that, Uppling hopes, will have only grown over this forthcoming summer.

Though the group is based over in the Ann Arbor and Ypsilanti area, they’ve said they often feel more at home here during their Detroit shows. “We have still never had someone be rude to us at a Detroit show,” Uppling said, “and…that’s not really always the case with Ann Arbor. We’re definitely not going to give up on the Ann Arbor/Ypsi scene and we think it has tons of potential.” But Detroit, they’ve found, tends to get a bit more amped for a Landmarks live set…that could be the heavier rock element or it could mean one city crowds have less self-restraint than another…? Who needs to start that old debate again…

One thing’s for sure… Detroit certainly has more (actual) landmarks… But let’s just listen to some music, eh?