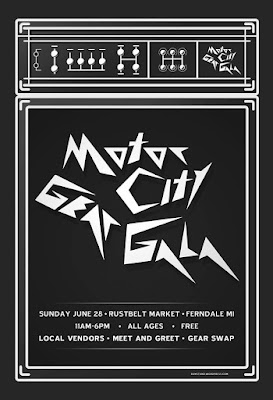 "...with (guitar) pedals..." said local musician Dustin Mclaughlin, "having multiple delays is like having 10 shades of green to choose from... Different colors in your crayon box..."

"The unique thing about musical gear," said singer/guitarist Jason Stollsteimer (of PONYSHOW), "is that there's always something new and someone's always willing to push the envelope to see what sounds they can create and harness."

Full line up and more information

Stollsteimer and Mclaughlin are a pair of particular gearheads who have respectively accumulated considerable collections of equipment, either from certified addictions or just from the passing of time & different bands/tours...

The Gear Gala they helped organize aims to engage the entire music scene of SE Michigan, not just the hip indie rock groups or the epic psych-rock ceiling shakers, but every musician out there, everyone with a guitar or a mic or a K-Oscillator or a drum machine or whatever...everyone interested in experimentation (or augmentation) of their sound and their songs. Tables are for rent for anyone interested in selling their gear. Professional retailers and repair services will also be at the Gala, equipment ranging from pedals, to cables, recording and guitars. There still might be some time to reserve a table if you email motorcitygeargala@gmail.com right now!

"I've been paying for multiple storage units full of random pieces of musical gear for years," said Stollsteimer. "It was time to find new homes for said-gear. When I posted on Facebook that I was interested in parting with some of my collection, someone suggested I have a gear show. I immediately thought that my friend (Mclaughlin) might be interested, as he works with & loves pedals. So...we're both hoping, now, that this can be a yearly event."

The Motor City Gear Gala can bring together not just the collectors but also innovators in new musical gear all based around the Michigan area.

"Working for a local music retailer and effects-pedal company," said Mclaughlin, "the idea immediately sparked to gather up as many local music equipment manufacturers as possible and do a showcase instead of just a garage-sale type of gear swap (even though that's still part of it!) It's audible arts & crafts fair showcasing specifically local talent."

The duo hopes to start building a community around gear and sound innovation. "(We'll) get together, share notes, techniques..." said Mclaughlin. "I think there are more than enough manufacturers doing exciting things locally to make an event out of it."

The other intention is to defy typical expectations of a 'guitar show...' "We want the guitar guy to come in and check out Renaud Audio's table and learn about synthesizers," said Mclaughlin. "Or, a young musician can talk with the folks at DIME (Detroit Institute of Music Education) about perusing a professional career in music." He points to Wallace Guitars as just one example for further insight and education, as the green-minded designers use reclaimed, old growth wood from historic buildings in Detroit to make the bodies of their guitars. "They're literally using the roots and foundation of our city to make something musical!"

So get in touch (via email) or just be sure to swing by the Rust Belt Market this Sunday. The duo, we'll reiterate, are hoping that this can not only become a yearly event, but also build more bridges throughout the scene.

"From the earliest recordings of putting razorblade slits in your speaker cone to create a distorted effect to recording a vocal track in your tile bathroom to emulate reverb..." Mclaughlin said, "...to the fuzz pedal, the Moog synths, rack gear, the effects pedal boom...all of it. Different shades of expression and the different colors musicians can use to get the sound in their head out onto the canvas is what keeps us inspired."
Posted by jeff milo at 6:27 AM