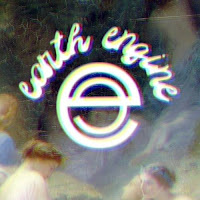 What I can tell you is: I walked in for a show at the Loving Touch with Earth Engine as one of the openers. I got there for their first song and jostled toward the front row. I didn't move away from that spot, not for a beer or to go bullshitting with anyone else in the back, until the last note of the last song of their set...

So what's the draw? These guys don't particularly look like pop stars, and it's not like they're performing any acrobatics (or pyrotechnics) up there; there's some surreal/geek-chic stage banter, but presentation-wise, it's pretty much a rock 'n' roll band...... That being said...Why couldn't I move? Or stop listening/watching...? Some kind of new age mysticism? Hypnotism? Possession? Sorcery? No.... 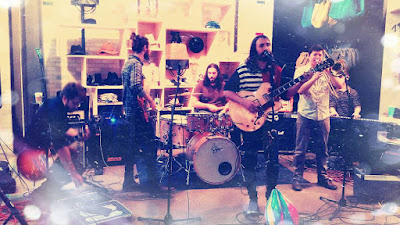 Earth Engine reach back to the Elephant 6-era of mid 90's quirk-pop, when college-rock radio completed its metamorphosis from the riffy R.E.M. days and started embracing a more cavalier kind of psych-tinged, baroque-inflected, harmony-centric sweetness. Then again, they also touch into the very very early 2000's sensibilities for spookier, headier trips, like some kind of fuzz-haunted carnival of funk. They have an ear for vibe-augmenting jazz,too, with those versatile keys ("Joy Blue") and that auxiliary trombone ("Year One"), there's a bit of a tango going on, rhythmically, underneath the hornet-haze buzz of those guitars in "Fever of Static."

I mean, you could name drop Neutral Milk Hotel if you like, but you could also namedrop the Unicorn's debut album, if you're into namedropping. Earth Engine have an intangible compound in their mixture though... It's likely found in how dangerously-close they flirt with fitting into jam-band territory or jazz-rock territory or freak-folk, even, and yet gracefully hover free from any solid clasp to either of those...

"Fever of Static" blends discordant indie-rock with wisps of R&B, jazz and arena-rock/butane-lighter waving balladry (complete with Space Oddity-recalling hand-claps in the refrain). So...they span the globe of genres, certainly.

"We have changed so much since beginning to work on this E.P.," Gregg said. The band includes Gregg, along with Matt Romanski on lead vocals/rhythm guitar, Aaron Romanski on bass, Tom Stanko on drums, John Raleeh: trombone (and keyboard on the recordings). Niklaus Landstrom joined halfway through 2015 as the group continued evolving towards this debut E.P.

"I'm happy that people actually have something to listen to of ours," added Gregg. "But, more than anything, I think the whole band is excited about what's coming next. This E.P. is pushing us towards that..."

The songs were laid out in such a way, Gregg revealed, so as to evoke a sense of enticing unpredictability from the listener; meaning, you're supposed to have no idea where the song goes next, or how they'll sound in the bridge before the final chorus. Wait, do they have choruses?? (Exactly!)

"(This E.P.) is essentially our introduction and we plan to expand on much of this type of material in the future," said Gregg. These songs act as tributaries tiding toward the band's future seas of an even more expansive and exploratory kaleidoscopic rock. "Listening back to it, now, I think about all the different paths we chose to take within these songs; all the intense discussions we'd have as a group about their instrumentation, their direction, what aspects we felt should be most important and prominent to the listener..."

Gregg, among the members, was present for just about every moment of the E.P.'s recording process. "So, I have some very vivid memories like John doing the intro to "A Fever of Static" in one take in the Wayne State practice rooms, or Matt recording vocals in a makeshift "vocal booth" I set up in my closet, haha. We took our time with this, looking for the right performances, finding out along the way how exactly we wanted to make our first statement as a band."

The recording process itself was a bit odd, or even erratic, since they did it all on their own and in several different locations, including Assemble Sound, the Recycling Center (in New Center) and even in the basement of Detroit Institute of Bagels (where Gregg works). Nigel Van Hemmye (of Nigel & The Dropout) helped with mixing and production work at Assemble.

Where to next? Anywhere and everywhere! Any sound or style they like...