At the end of January, Detroit-based songwriter/producer Derek Stanton released two Turn To Crime albums, a storied collaboration with Dorian and Alejandra Foerg...(in fact, the pair actually fell in love as these two albums were being made and the release of this music is timed perfectly to the birth of their son). Sounds & Silence has more info on that...

HERE...is an interview with Turn To Crime's Derek Stanton that I conducted two years ago that never made it to print...
The Detroit trio released 2 free albums online last week... 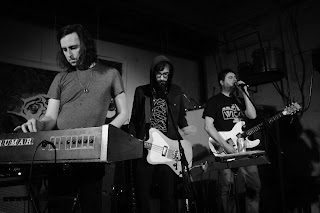 New York never challenged Derek Stanton. The place always energized him, he says, even if he was sleeping in a cubby hole made of plywood.

When he was younger, he’d go days without sleeping during whimsical weekend road trips to Brooklyn or Manhattan where he’d catch concerts of his favorite bands. Incidentally, the Detroit-based singer/songwriter wound up moving to New York and he eventually opened for (or toured with) many of those same “favorite bands” through Awesome Color, a rock n’ roll trio he played in that nearly broke into the big-time (at least by post-millennial/post-Internet notions).

But he’s moved on… Stanton’s just not easily discouraged. He’s also uncommonly patient. Both qualities helped him establish his own record label, along with his latest project, Turn To Crime, which he’s been developing over the last several years, out of his home studio right back here in Detroit. 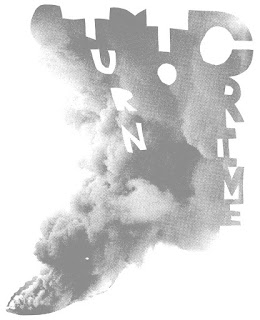 When asked if starting a label was an ultimate goal, he says no, not really. “For the longest time I didn’t want to; I was totally fine with just being a musician that just recorded songs every day and that was that.” In fact, for years, Stanton would record songs and stream them on bandcamp, for free, only to take them down and throw them away forever after just one week.

For Stanton, it seems, as we inquire further, it was never about self-aggrandizement, never about showing-off, never about hustling people to share and tweet about his new songs.

“I don’t care about anything other than just the process of recording, other than just writing.”
Turn To Crime, which just released two free albums at the end of January (on Mugg & Bopp), actually started more than six years ago as just one of Stanton’s numerous side projects. Through the mid-late 2000’s, Awesome Color seemed, from the fans’ perspective at least, to be a big deal: ostensibly getting praise from the noise-rock Ceasar, Thurston Moore, when they were signed to Ecstatic Peace while attracting a considerable bit of blog buzz as they toured constantly, (notching up to 200 shows a year).

But Stanton would still busy himself with other projects, particularly writing and recording. “(Awesome Color) was a very natural, easy band and it just consumed part of my brain. But, I didn’t have enough time to get any of the other things out, solo albums or whatever, because we were touring so much. But, the reason why that (AC) started was I had set up a practice space in New York and we could record there or do whatever.”

But jump back about 11 years or more, as he arrives in New York, still undaunted. He got a loft and built rooms out of plywood and drywall, turning it into a practice space first and living space second, (the “beds” were burrowed into cubby spaces above the studio.) “I guess people might see that as a challenging living arrangement, but to me it was awesome. In fact, I never lived anywhere that wasn’t like that: ‘homeade.’ Those scenarios, the practice spaces, lofts, the homemade drywall, wherever I lived in New York I had to be able to play and record music.” New York wasn’t a challenge to Stanton. “No, it was fun.”

Towards the end of Awesome Color, Stanton was living in South Williamsburg, above a popular venue called Glasslands. He had his usual set up, a loft that served as practice space/recording studio/bedroom (in that order), and helped book shows, work sound, bartend or monitor the door, as bands like MGMT and The Yeah Yeah Yeah’s came through, substantiating it as a premier venue. “Suddenly, I start having 5,000 roomates a week, sharing bathrooms with tons of people…”

It was time for a change. “I had done everything I could in New York and I realized that all the sky-rises were going up on Kent Avenue, where I was, and everything had changed in the seven years I was there. And…I didn’t expect to stay in Michigan for more than a couple months when I came back…”

The problem was, Stanton moved back home to Detroit during the peak of the Great Recession. “And I realized that this was my opportunity to do something more with my life: buy a house, set up my future and just wait for the apocalypse.” That house that he bought, of course, was soon outfitted with a recording studio.

The joke was, of course, that if Stanton couldn’t figure anything out by the time he moved back to Detroit, then he’d just have to… “…turn to crime,” instead.

Now, Awesome Color’s sound was fast, vigorous and loud; it was heavy on guitars and grit, bass and bellicose undertones, with drums that wanted to just keep on driving…There were distinct dynamics to the grooves though, with fills and seething solos that might set them apart from just another MC5-inspired ruckus-type rock band, even if, to no avail, that’s how they were often categorized.

But Turn To Crime, particularly here on its debut, is a ganglier creature, something fantastic and weird that grimaces as it grins, fogging melodies with distortion and sandblasting its hooky guitar riffs with reverb. It’s not new-wave, but it’s almost like Industrial-Pop. It’s nihilistic, yet has intangible charisma.

Stanton’s raspy vocals seem to surf upon the rhythms and the guitars flit into impulsive bursts at the refrains. You’d have to go back to the primordial muck of The Velvet Underground’s “Run Run Run” or maybe a more melody-insistent Thee Oh Sees to find any comparably unconventional psych-sounding schema.

And yet, Turn To Crime’s first initial releases back in 2013 were being categorized as “garage rock.” Maybe that’s still just a Detroit thing. “Turn To Crime’s only inspiration is to be different from anything I’ve ever heard. It’s not even taking influence of other bands; I’m just taking my personal experience and doing the opposite.”

Still, the whole process of songwriting and performance, for Turn To Crime, “…is crazy.” Stanton is currently working with his longtime friend and collaborator Ian Saylor, along with Chris Campbell (from the Johnny Ill band).

It was a significant change of lifestyle for Stanton, re-situating back here in Michigan a few years ago, away from the big buildings and bluster of Brooklyn and into his first actual house (that he’s made into a home recording studio) in Southwest Detroit. No more tiring tours, no more sharing bathrooms, no more subways. Not much to be distracted by, really – so he’s been able to slowly, patiently save up and set up his record label, (Mugg & Bopp). He had his first records pressed at Archer (on Davison St) and printed the covers at VGKids (in Ypsilanti), later packing up the cover art himself.

“If I was going to do this, I thought, I wanted to keep all my money local and do everything in Michigan,” said Stanton.

Towards the end of our interview, he says something, with a subtle, confident smile, what sounds like a modus operandi, “there are no rules.” Turn To Crime, he said, is always subject to change and will be whatever Stanton wants it to be; consistently stretching in every directing as a means of Stanton and, now, by extension, Foerg and Saylor, stretching (or challenging) themselves. There are no rules.