Pressure is dumb: An interview with Johnny Ill Band

John Garcia asked me, recently, to throw a few words around to describe his band: The Johnny Ill Band.

I thought I hit the nail on the head^ 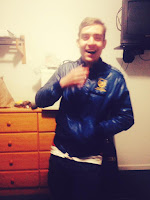 But then, the metaphoric plank of Johnny Ill Band's music was always inherently unhinged, it never swung snugly toward the rock latch or punk latch or whatever else kinda label you wanted to hammer onto it. How far can I take this wood-metaphor? Can I talk about how "knotty" this music sounds?

Johnny "Ill" Garcia started this band about seven years ago. He's not needed to stay consistent with his live appearances because the band's performances, along with their sporadic output, have consistently been works of thought-provoking satire and ferocious art-pop theater.

There is something elegantly anti- about their whole aesthetic. Paul Derochie is on guitar, with Pete Steffy on keys and Chris Campell on drums.

There's some sandpaper distortion over notes that bend a bit flat here and there, while our reluctant frontman, a punk monologist and rock 'n' roll prankster, sang-spoke or shout-crooned a lyrical batch of curious thoughts and veiled commentaries. Sparse structures give space for plenty of entrancing keyboard weirdness and some near metal-tinged guitar acrobatics.

Anyway, before I get off on a tangent, here, let's make sure to point out that Johnny Ill Band are "back..." again! It seems like we only hear from these guys a handful of times throughout any given year. BUT... This time, Johnny Ill has news of a new album on the horizon.

I feel like every time you guys start getting a string of shows together, after a period of time, there's a flare of excitement in the scene. Like it's another come back... Does that ever create any pressure? How do you guys respond to pressure?
The only pressure was the pressure the band and I put on ourselves when we decided that we wanted to make a new record. It definitely took longer than I wanted, and we still haven’t finished it. But I don’t think it changed the outcome or anything. As far as music goes there shouldn’t be any pressure, that’s dumb.


So you've had some new material that you're recording...How do you feel?
Yeah..., so here we are, almost a year later and we’re about to finish a full-length record. I didn’t have any expectations when we started getting together more frequently and I started writing more. In my mind these new songs are a departure from what we were doing previously and I knew going into writing that that’s what would happen so I’m happy about it.


What about your feelings toward the spotlight, in general... How have your feelings evolved over the 6 years that you've been a "frontman..." Were you ever a "frontman"?
Lately I’ve been trying to learn what it’s like to be a “front man,” I guess. It’s weird how not having an instrument in front of you makes it more intimidating experience on stage. People probably expect me to jump around more but I don’t really do that. I’m not sure what I do... but I think it’s more than just standing still so it’s not the worst. Wait -- I might have already talked about this the last time we spoke.... But, I've also applied for the Kresge grant and we’re almost done writing this new album so... I have been doing more things as well, for the band. I’ve also been on a boat a couple of times since we last talked.


How has the band begun to operate over the last year, compared to the way it once did....? What have you.... (Oprah Winfrey interview moment)....what have you learned about yourself, John....?
Well..., I took singing lessons recently, thanks to Katie Else. And that was for a few months last year and the first couple of lessons were completely terrifying. Here I was, standing in someone’s living room I had just met while her husband was in the kitchen, trying to remain calm while I was forced to walk funny and sound funny all in the name of being a better singer. That was definitely harder than singing on stage in front of lots of people with a band, so that’s something I learned. I also learned that I had some bad habits when I sing and I guess that was the whole point.


Future plans, then? For yourself or for the band?
Sometime in the near future I want to start taking singing lessons again.