I thought to myself, on this otherwise same-as-any/sleepy-sunny afternoon as I was contemplating the complete digitization of every thought, movement, exchange and social grace - that we should just dive in and make more clutter for the internet. Thus, I'm continuing this scattershot "blog" with my nihilistic word-splurges on music.

This week, (and new to this format of Deep Cutz,) I wanted to put up a few back-logged album reviews. The first, from a local label, God Sags His Pants with their Winter Comp.; then the Scandinavian house/trip-hop/techno of diskJokke
and then Clinic and the Breeders (from April.) 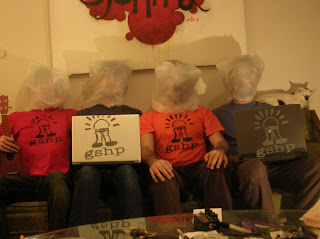 A belated heralding for this exceptional compilation (organized earlier this year as a winter-offering) from the impressive and ambitious local rock collective – God Sags His Pants records. This strong, front-to-back listen features the brooding, sometimes volatile/sometimes serene anti-folk mingling with punk, art-rock and singer/songwriter reflections that are typical flavors for the label. Featured here is the head-swimming, layered rock odysseys of Big Black Cloud and the gritty, bristly rock/pop and punk of Noman – the label's flagship bands. Also featured are BBC side projects: singer Costa's intricate acoustics in a melancholic sway as The Blindness of Helen Keller ("Nebraska"); bassist Schram galvanizes a subtly rhythmic solemnity as Shiloh (with "Fmly"); while guitarist Miller and drummer Davis experiment with more avant-electronic wanderings – Miller with a fuzzy distorted woodsy trip as GK (check out "Ice Cream For Eeto") and Miller as a duo in the more ambient electronica of In June (instrumental centerpiece "Breath of Fresh Water.")

Noman holds their own with the most energetic, driving shake ups (the generational indictment of "Bombs Away") and you get a couple BBC cerebral epics ("Merriweather.) Finally, the versatile psyche-folk of GSHP allies (Colorado-based) Penninsula Pardon (the dreamy haunt-pop of "Diadema Dreams") almost ends up stealing the show – but that is a difficult task considering the company of all these talented musicians.

diskJokke – Staying In B - smalltown supersound

A running, disorienting piano jaunt fades away to wavy synths and immaculate spaced-out strings as a sturdy dance beat settles into cruise control for a nice 6 minute electro-rave – thus opens diskJokke's "Staying In" LP; a resident house DJ out of the Oslo, Norway (OsloDisco) scene (linked with Lindstrom and Prins Thomas), Joachim Pyrdahl is distinguished by his dub and Italo-leaning styles (utilizing horns, bongos and flashy bass booms) but fused with chilly synth tones of classic house and techno - heavy on disco and the futuristic-robotic-sensibility of new wave, a bit derivative but still inventive.

Do It! Declares itself "a celebration of the past to your present," with a synthy gale bridging a fuzzy guitar punch and hallow beat over the Davies-ian opener "Memories;" and one can't help remembering (or noticing the gap this record represents structurally and aurally from) their fuzzy spooky and sparse doo-wop nightmarish debut full-length Internal Wrangler. Do It! is comparatively coherent and clean and, in fact, quite strong in its overall statement (with beautifully surfy-toned guitars over "Tomorrow" mixed with their characteristic creepy harmonica tones that sound easygoing compared to early work.)

The quartet continues their smashing of new-wave with surf, 80's pop and krautrock (see the reeling slow-dance bopper "Coda" or the dramatic and swaggering guitar heavy "The Witch. (Made To Measure)") Less evident here is the volatility of their past work – where songs once felt as though they'd deteriorate before the 3rd chorus into some hallucinogenic oblivion – Do It! features a steady pace throughout (coming and going perfectly in under 35 minutes) with well-crafted minimalist, fuzzed-out rock songs that drift from Pixies-ian loud-to-soft chorus-verse structures (see "Free Not Free.") Stand-out track for me so far, in terms of classic Clinic goes to the guitar noodling subtle freak fest of "Corpus Christi" and it's wind up grinds and strange with a wayward solo from a snake-charmer's pungi. "A celebration of sheer joy."

Spring means fresh, vigor, sprouting, blooming; yet, in the music world it's been a parade of 'what's old is new' stories like the Rolling Stones concert film or R.E.M.'s resurrection or Kim Deal, the beloved but troubled bass player (and singer) from one of the most influentially bastardized (but still one of the top six most important bands ever) the Pixies, who is being hailed with a 'comeback' of her 'other' 'poppier' 'alt-rockier' band, the Breeders – whom we haven't heard from since they're critically unappreciated Title TK (in 2002.)

Mountain Battles is darkly enchanting, with beautiful grooves properly buzzed and layered by producer Steve Albini in the Breeders-preferred anti-computer All-Wave style. The sound is raw, sparse, with hollow drums and minimalist guitars and dreamy but dreary vocals. The rush-fuzz energy of "Overglazed" hits the gas, opens the window and drinks in the sky; "Bang On" sounds like a basement b-side booty-stomp ala strung-out weekday B-52's; "Istanbul" rides a similar low-key but heavily grooved cool-bop ditty vibe; while "Walk It Off" recalls the coarsely shimmering hook-filled melodies and heavy-chug-strummed sweetness of much of their earlier work, "Pod" and "Last Splash." It all has a sort of disoriented solemnity, and at times feels a bit patched together, but the overall effect is a coaxing confidence and a strange sort of swing.

Old may be new this spring, but that's fine – cuz this is a damn fine record.