They'll be playing the Magic Stick on June 2nd. 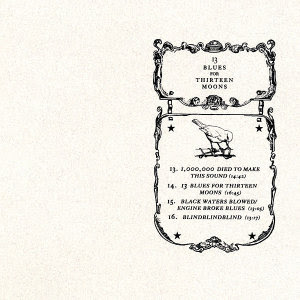 Silver Mt. Zion Memorial Orchestra matter-of-factly weed out the uncommitted-to-the-outsider-trip-out-epic-soundscapes by opening with (truly unique to CD format) 11 tracks of cut-up-snippets of an eerie 75 second instrumental song – then falling into the 15 minute "opening" (at # 13) track, 1,000,000 Died To Make This Sound (chanted for the first 2 minutes before falling into a feedback heavy, cello-saw-groove with heavy rhythms and booming nasally vocals.) An easy transition for God Speed You Black Emperor-fans, (this being the project of that band's Efrim Menuck.) Get deep enough into their thick compositions and your mind'll be blown by the intricate effects and 2001: A Space Odyssey-I-can-taste-colors
-trip-out crescendos. An acquired taste for a certain surreal time of day.


Coming out next week - Islands will release their long awaited follow up to their sort-of debut, Return to the Sea (though they are often seen as starting back in the early 00's as The Unicorns.)


Until the album shows up, (you can hear the whole album on their myspace) here's Islands on Deep Cutz: 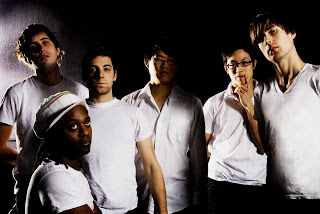 Islands Are People Too

He used to be known as Nick Diamonds; he used to be in a band called Unicorns until the Montreal trio burned themselves out on the road, leading to the departure of founding member Alden Penner. After one album, that band became Islands. Islands is best known for aerodynamic calypso-inflected indie rock, spooky dance overtures and sugar-pop craftsmanship, yet simultaneously, Thorburn ardently seeks out hip-hop related side projects.On tour, he lost his other ex-Unicorn/founding Islands member, Jaime Thompson, after which blog spinsters speculated that Islands would become a hip-hop project called Th’ Corn Gangg, which was eventually clarified into just another Islands side project celebrating an occasional non-Islands reunion of Thorburn and Thompson.

Islands released an album, Return to the Sea, with Thorburn now framed by half-a-dozen highly skilled music school students tooting, trilling and sawing on flamboyant trombones, flutes and cello accompaniments — and then went under the radar for the last year, before which Thorburn declared dynamically, “Islands are forever.” And during said-quiet-Islands-year, he stuck his hand into numerous other side project cookie jars of varying genre types and influences.

This soft-spoken Canadian, with sporadically heaved moment-freezing sighs, explains why he deceptively seems hyperactive: “Life’s gotten better,” comes his airy monotone. “Since everything’s gotten sorted out with the new record (Arm’s Way), it’s been in total purgatory for about ... 10 months. It was because we were trying to get out of our really shitty label in Canada.” Breaches of contract meant a looming court battle, but Islands settled: “It was an epic fucking battle — and I chose to enter into it. We came out victorious by virtue of the fact that we’re not giving them this record, and it’s a really good record.” (Out soon on Anti-).

“I really didn’t know what to do with myself,” says the multi-instrumentalist. “I couldn’t stop writing songs but I couldn’t release them.” He collaborated with Toronto musician/once-Islands’er Jim Guthrie, “one of the most gifted, insightful musicians I can think of” to form Human Highway and make “a mellow kinda record, with a lot of harmonies.” The two recorded their first HH song while holed up in a haunted hotel on tour, venturing into a vacant room upstairs and strumming/whistling through a rough composition. Also to kill label-transition-time, he reunited with Jamie Thompson to restart beat experimentation with Th’ Corn Gangg. He says when he started Unicorns he felt he would be in that band for his entire life.

“When that band broke up it kinda shattered everything. Now, I’m a little more adaptable. I can move onto different things if need be, but Islands is definitely my main love, my main focus.” Reflecting on shifting as a songwriter from a trio to a duo to now just himself, he says he feels he’s continually getting better — and no, he’s not obsessed with a pop sound.

Arm’s Way shows signs of this: “The melodies are more developed, the harmony’s there, it’s just a lot more musicality … it’s like a marble slab that we’re carving out, and each one has a unique cut, a unique perspective. Yeah — fun record.” RDW
Posted by jeff milo at 5:51 AM