I, Crime (Saturday at Northern Lights Lounge), with Giant Tigers 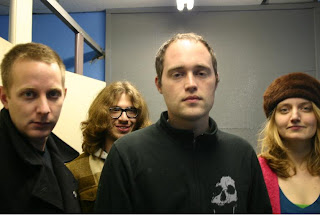 I, Crime are stunning, well-versed songwriters. Consciously aware of whether I'm shopping too closely to the Cliches-department, I wanted to avoid ranting on about how they are hard to label. Maybe they aren't? I could throw adjectives out like soulful and rhythmic and somewhat abrasive, but I don't know if it would do them justice.

Listen to “Priest” and you hear post-punk; listen to “Drowning” and there’s almost a neo/alt-country vibe; and then the swaggering “It Ain’t Right” feels straight-up indie-rock.

Formed in 2004 from a series "beer-influenced Tuesday night experimentations" between writing duo Jennie Knaggs and Anderson Walworth, they soon added percussionist Charlie McCutcheon and began playing out as a trio. Recently, bassist Mike Ventimiglia joined to make it a quartet.

In 2006 they released the Get The Knife EP. Currently, I, Crime working on a full-length with engineer Collin Dupuis (Zoos of Berlin). “Not only is he a totally amazing engineer,” said Jennie, “[and Grammy nominated, but] he is [also] a close friend who has seen the band progress.” The versatile pop/indie/punk/psych/everything rockers are releasing a 7” single for the song, “Dove Skin Gloves” this spring (with the LP out, most likely, in September).

Genre specifications become bastardized — go see this band if you want some of the best rhythmic and stylized rock 'n' pop with splendid hooks and harmonies.They play Saturday at Northern Lights Lounge with Giant Tigers.

DC: what's been some of the new developments for I,Crime?

We have been in and out of the studio the last few months working on both a single and a full length record. We will be releasing a 7inch of our song "Dove Skin Gloves" this spring, and the full length should be out by September. Its an on-going project - we just keep adding more songs to the list and experimenting with sounds to bring out the best in each song. It helps make the old songs new again, too. We are really lucky to be recording with Collin Dupuis (drummer of Zoo's of ). Not only is he a totally amazing engineer (and Grammy nominated!!) he is also a close friend of ours who has seen the band progress, so he has a good understanding of what we are going for. The five us really work well together.

DC: Does the collaborative songwriting between you and Anderson still flow the same as it did in the band's more experimental, days? how has it changed? (or not?)

JK: When we started, we were just drinking beer and making stuff up every Tuesday night in my basement. There was no structure or intension at that time. But once we realized we could write real songs together, I think things naturally changed. We may be more accustomed to each others styles now, but mostly our songs come from the same places. Either based on a jam session with the whole band, or one of us will write a song and the rest of us tweek it until it feels done.

Actually, the song "Dove Skin Gloves" none of us remember writing...I was clearing out some memory on my phone and found a recording we had done of a simple idea...I played it back to the band and we all fleshed it out into one of our favorite songs. Its like we stole it from ourselves...

DC: Sometimes the influences-question is inevitable…

Walworth: That's a hard question... past influences always find their subtle places, but lately I've been into to checking out new punk bands like the potential Johns or the Rats, It seems like it's easier to find a good punk band lately than a tolerable indie rock /rock band.

JK: As a band, I think all of our tastes have always been pretty eclectic... I think we are alike in that way, and that hasn't changed. We all can appreciate a good pop song and then turn around and listen to some punk rock or whatever. But thinking about how other music influences your own is always a difficult question. Influences really sneak in to where it’s hard to spot them in your own music. If I ever try to create a sound based loosely on something else I heard, it usually turns out to be trash. My best songs are always accidental. -


DC: You seem like a laid back outfit, not playing out that much locally, not over-exposing yourself with festival appearances, but still keeping it legit and playing live on NPR and getting out and touring, etc..., are you conscious of this low-key approach or of your still-somewhat (my word, somebody give me the hook for this pun…) “criminally”-low-profile in Detroit? is it a purposeful approach? 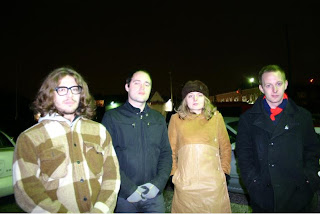 DC: What's coming up next for I,Crime?

AW: Hmmm... there is the 7inch and were booking a midwest/east-coast tour for August to celebrate. I hope my eyes don't turn yellow again...

JK: Yeah that was gross.