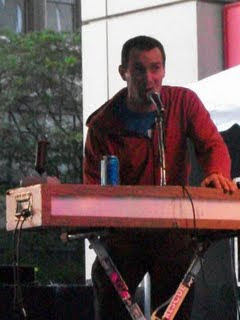 Shawn Knight (left), with his band of metal-clanged, groove-heavy, shout-sprinkled noise-poppers, Child Bite, continued to tour on the material from 08's myth-rock romp Fantastic Gusts of Blood; they grew their face fuzz and drove all the way to Ancorage AK to compete in the World Bear and Mustache competition (and, tour/perform their way out there via a slowly failing van); they released three 7" records, split with three respective bands while doing more shows; and, most recently, while continuing to work here and there throughout the year on various art projects, Knight also did some recent screen-printing poster work for the Jesus Lizard, Russian Circles -and- Melt Banana (the latter shares a bill with Child Bite, tonight, 11/28, at the Pike Room).
With all that leaving even this writer a bit out of breath, Knight is continuing to dabble in further arts, of the recorded and performance variety - via Junger Witt - a "more mellow and vibey" affair, with a circulating cast of players joining Knight here and there for shows. The project will be recording with Zoos of Beriln's Collin Dupuis the night before their performance on December 1 - at the Pike Room, in Pontiac - and will subsequently perform those to-be-recorded songs. Joining Knight is Brandon Moss (from Wildcatting/Bars of Gold) on drums and Ryan and Stefan ("from the Detroit jazz scene") on upright bass and sax respectively.
They'll join CJ Boyd in opening for longtime Child Bite allys, Stationary Odyssey, their shredded acrobatic noise-pop brothers from Indiana.
Dec 1 - Pike Room
Posted by jeff milo at 8:31 AM

BTW, Ryan Enderle is the name of the bassist....BAD MOFO!