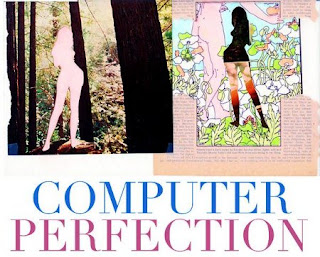 Corduroy: "I think what happened on (We Wish You Well) was, we kind of came into our own as musicians, vocalists, writers. We had previously…well, it’s hard to do anything but compare yourself to your former self, but I was a guitarist, Bem was a vocalist, (Burgundy) played bass… LTD was always the drummer. And, our roles… the lines blurred completely. It wasn’t even role reversals, it was just, there were no roles."

Computer Perfection — the fuzzy-pop, prog-dashed, krautrock-revering musical project that the pair (both clad in sweaters with oxford collars peaking out) along with Corduroy’s wife, Bem, started after their last project, Pas/Cal started its slow descent into ostensible oblivion.

The band fizzled away and the trio descended into the basement to see what they could make… to find new roles… to get "uncomfortable." The result is their debut LP (out recently on Le Grande Magistery) titled We Wish You Well On Your Way To Hell.