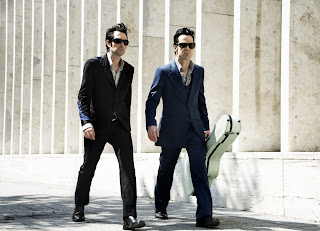 
Admittedly, when you're rolling and reveling in the "blues/rockabilly-tinged art-rock scene," it probably won't be long before you connect with like-minds.

Matt Verta-Ray reflects on the gravitating pull of stylistic commonalities – the same pull that brought him to fellow punky-blues-deconstructionist Jon Spencer, mixing and flowing together in the gutters of New York, thanks to the city’s niche-like layout of hamlet scenes.

Just as Detroiters of a few years back often regale the close-knit neighborhood-y vibe of the garage rock scene, it would prove to not be such an unfeasible step for Verta-Ray and Spencer (who, in late 2004, formed a Sun Studios-style inspired grime-dipped rock group called Heavy Trash) to wind up also bonding and collaborating with Detroit’s own two renowned garage rockers, Mick Collins and Dan Kroha (of the recently reunited Gories) through various projects, over the years.

On 11/12 - Heavy Trash brings the Detroit-revering duo back to the area, with a show at the Crofoot, with the city’s own gothic Americana punk-lovin’ quartet Duende. Side show interludes will be performed by Satori Circus and Chatal Dixon and the evening will be hosted by Steve Barman of the Steve Barman show. Kroha will be on-hand to provide some DJ-ing for his long-time friends.

Heavy Trash is the melding of a two talents caught between punk and rockabilly:

Take Spencer, the rustbelt-born/NY-mutated/punk-loving avant-garde rocker who came about in DC with the noisy raw calamity of Pussy Galore and later into the intricate postmodern soul-punk with Jon Spencer Blues Explosion – and Verta-Ray, the often modest, wildly talented guitarist who came from Canada where he was raised on a steady diet of traditional folk and seminal southern blues, who developed through indie-rockers Madder Rose and then the raucous art-punk-recalling rock of Speedball Baby. The two met and bonded through the 90’s while Blues Explosion and Speedball Baby toured together. 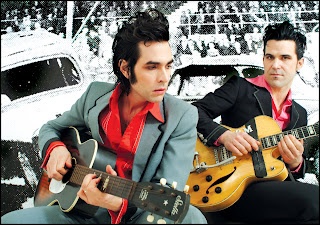 Eventually, both bands met with downtimes and the two, who would bump into each other constantly in this “really crummy area of town,” finally got the chance to make something.

“Since I have my own recording studio,” said Verta-Ray, referencing his NY-Hed studio, “it wasn’t a big formal leap to hit a button and turn on the tape machine and start recording. It happened extremely organically.” Their self-titled debut, in early 2005 was “supposed to be this experimental studio album we hadn’t planned to tour on, but, some tours came up and things took off on their own. It was sort of one of those non-career—careers.”

Last month, they released their third proper LP Midnight Soul Serenade, a “more stripped down and, I think, raw” affair. As opposed to Going Way Out (in 07), which was “more ensemble” – Midnight goes for the “smaller, but more intense” sound. The band toured modestly throughout the year, with numerous two weeks stints, consistently returning to the studio to record handfuls of songs. “Usually a band will tour, then play the record, and then, ‘oh – we should record a new one’ and they have to change modes entirely. It seems kind of an odd way to be an artist, to start and stop. We thought, why don’t we just keep recording the whole time (on tour)?”

It was in that same room where most of Midnight was laid down, where Duende recorded their own recently-released LP Remnant of a Remnant, during which Verta-Ray was able to bond with the band.

With Heavy Trash, the duo initially wanted to follow a strict Charlie Feathers-inspired rockabilly – riding slap-back bass and letting the guitars lead the way under syrupy, shimmying doo-wop vocals. In fact, it may be the vortex where both men are at their least stylistically-contrarian modes – and at times feels like heartening love letters to the classics for which they both share a love. It is, admittedly, and also inevitably, alight with their edgy signatures, if its Spencer’s wild wiggly yelp or Verta-Ray’s lightning-burnt guitar stabs – but it’s all very much toe-tapping, hard gut-punching roots rock, with that slick-black hair and rolled up blue-denim shake up balladry.

And it’s all spiced very nicely by their individual upbringing. There’s a moment during a recent interview with a Brazil based MTV affiliate where they rattle off their formative influences. Verta-Ray speaks of his mother’s eclectic record collection, her injections of folk and rockabilly into his young ears and his early exposure to Robert Johnson and Bo Diddley. Meanwhile, Spencer’s first references are The Gun Club and The Cramps, two 70’s/80’s bands who no doubt “had the same records my mother had” yet regurgitated them through a punk filter.

“Jon would probably list Black Flag as an influence and I couldn’t even imagine being influenced by them, so there’s definitely things where our tastes don’t overlap.” He reflects on the middle-ground where he and Spencer meet: how does one raised on pure rockabilly synch with one identifying more with psychobilly? “I got all these kinds of roots rock n roll influences that were less… diluted.”

Being two years older than Spencer, Verta-Ray briefly ponders if that small elder window is enough to explain their nuanced taste differential (essentially two sides of the same tradition); sort of half-sure that it might, he rationalizes that, “In the punk era, things were moving so quickly….”

Verta-Ray continues, reflecting on where punk and 50’s folk/rockabilly met, mostly through awareness, taste and preservation.

“I remember when it was enough to be just into old music, like, that made you cool just ‘cuz you knew about some weird obscure thing. Also, back then, it didn’t have to be all that obscure to really seem obscure, like, if you knew about Eddie Cochran or John Lee Hooker, you couldn’t just google these guys on the internet, you had to be part of this elite club who knew about this crazy cool, partially forgotten music. A lot of the Cramps songs were other people’s songs that they put their own words on – which, that’s part of the long and honorable tradition of folk and blues. A lot of (the Cramps') edge was just knowing about all this crazy obscure stuff.”

“Most people back then, back in sort of the early punk days, were a reaction to the mainstream, which, was really watered-down and vapid, even by today’s standards, just 1970’s bullshit – so, it was so refreshing to have the punk message: you don’t have to do this, you don’t really have to know how to play, you just have to be aware and intelligent and keep your eyes open and all of a sudden you were a member of this really cool club that didn’t need the stamp of money or approval of any of this dinosaur rock stuff. I was a little young for the original punk wave, but it definitely meant a lot to me, the freedom that came with those manifestos still influenced how I operate.”

Until now, the duo would recruit “touring bands” or temporary players to join them, on record or for traveling performances. “It’s nice in a way to have different backing bands because you bring the same songs to a bunch of different people and they’re going to play them differently and bring different things to the music. The best strategy is to write songs that are close to your heart and then hook up with amazing musicians who you get along with. It’s hard to go wrong with that formula.”

Recently, however, on Midnight, they were joined by drummer Sam Baker and stand-up bassist Simon Chardiet and wound up really gelling. “We really settled into a groove with these NY guys,” said Verta-Ray.

Up next, the band sees much touring – including trips to Australia and Europe. Coming down the pike at NY Hed Studios is, hopefully, eventually – a collaboration that, once again, recalls Verta-Ray’s thoughts on the drawing power of similar tastes, when they’re joined by former freaked-up electro-doom-doo-wopper Alan Vega (of seminal NY art punk duo) Suicide.

Get a listen at: myspace.com/heavytrash

Jeff. Heavy Trash is also doing an intimate performance at Rock-A-Billy's in Utica. I wrote a quick blog about it and linked your site for the interview.

Christopher with The Sunday Idiom