Mick Bassett & the Marthas will debut their new line-up tonight at the Pike Room in Pontiac - former Satin Peach Ryan Wiese joins (just as former Martha Jesse Shepherd-Bates heads over to join the Peaches); Joel Sanders is another additon - bringing the ranks back up to a quintet (as former Martha Gordon Smith went over to the Sights). Man...all these line-up plot twists risks ringing of soap opera cliches...but hopefully everybody's still all gettin' along... 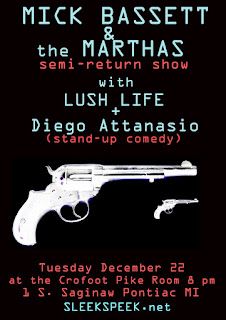 Anyhow - the Marthas have new stuff ready - and now that they (with drummer Erik and trombonist Allison) are back up to working order, they're hitting the ground running in 2010 - and they're joined by Lush Life and comedian Diego Attanasio.
Posted by jeff milo at 7:45 AM