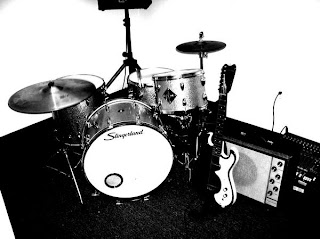 This Saturday, the hallowed and gnarled cavern of Detroit rock and hip/hop - St. Andrew's Hall - will host Quest for a Cure a benefit concert spearheaded (and headlined) by Quest Mcody along with Stretch Money. The former is likely known by those of you who watch MTV - but I'm dubious of any readers of this site being tuned to that - regardless...I bring it up because of Mcody's other work with softening the societal blows of hunger, illness and poverty. Joining the bill on Saturday is K'Jon and Monica Blaire as they perform to raise money for experimental treatment to save 8-year-old Benjamin Martin, whose seeking not covered through our lopsided and ludicrous system of health insurance alternative treatment for a cancerous brain tumor. 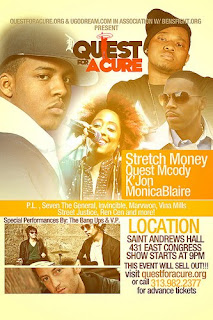 Partnered with this fine hip/hop/soul line-up is an up-and-coming blues rock duo called The Bang-Ups, who are Michigan born and bred - coming over to us from the west side. The Grand Rapids pair (Joey Dornbos-singer/guitarist; Brent French-drummer) embrace that fast, freewheeilng, finger-pickin style of neo-country rock mixed and muddied by stripped-down traditional blues, with a little old Americana and folk...and some straight-forward boot-stomp rock for good measure. They've got a record out - and you can get a listen at their myspace or find out even more here...