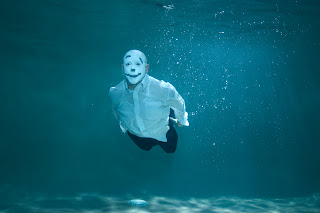 To close out the year, Detroit's treasured bizarro-vaudeville-rock-n-roll-theatre-rolled-into-one-man: Satori Circus, will provide a sort-of best-of series of his past shows - a wide arc of heres and theres and those and these and why-not-that-other-stuff-too kind of a deal - including his songs/performances from "Moses 39 (06)," "Funny As Hell (07)," "Child Proof (08)" and other pieces you may have seen from The Dirty Show, Damned Shows or Theatre Bizarre appearances. You could get something completely brand new - or even something resurrected from Satori Circus' first days, back in 1988.
Come witness a study in the power of the human body to convey a range of emotions - as presented through a staggering, beautiful and freaky ballet, contained in the arms, legs and painted-bald-head of Russell Taylor - aka Satori Circus

(photo: Mark Yasenchak)
Posted by jeff milo at 7:09 AM