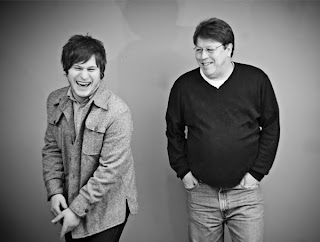 The Detroit music community is well acquainted with the stalwart pop sensibilities possessed by the Allen brothers, Ryan and Scott – even if their early 20’s were spent wrenching out jittery and ferocious punk-leaning hurrahs with their main project, Thunberbirds Are Now! To dig deeper, one could find Ryan flexing his flair for power pop in other projects like The Tiny Steps, while Scott had his own songwriting project, The Breakdance. (And, to dig deeper still, you could find them cutting their songwriting teeth on Red Shirt Brigade).

So this is where the cliché of the apple’s short distance from tree comes in; as one can point back to the pair’s father, Brad, and his own history of writing and performing music since his teenage years in the 1960’s and continuing to do so – even as, through the 90’s, he wound up being an integral influence/supporter/advisor upon the fledgling songs of his sons. 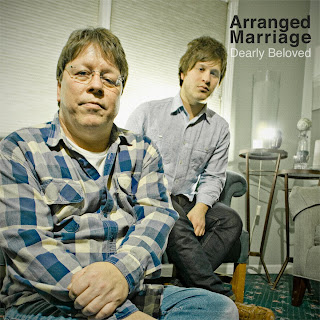 Arranged Marriage is the collaboration of Scott and Brad – the fruition of what seems to be a considerably heartening bonding period – involving the pair setting up their own home studio, experimenting with ProTools and patiently fleshing out the songs together in some nigh-Hallmark tearjerker-styled indie-pop orchestration. It feels like a father son sit down to spin two adjacent stacks of records from their respective collections – coalescing the range of pop styles (60’s to 90’s), be it AM Pop’s sunny, easy-going shuffle, with a bit of a jangled bubblegum docility, reaching forth to a more wistful 90’s-tinged indie-pop that waltzes in bittersweet musings. “Sit Alone” feels sweet and sad at the same time, yet buoyant enough to win you over with its jaunty pianos and swooned with the duet’s wispy vocals. A lo-fi/minimalist-synth vibe furls the corners of the tawny-toned beach swaying acoustic ballad “Not a Waste of Time.” Overcast sauntering for a chime-cheered croon makes for a nice rainy day classic singer/songwriter-esque sentiment on “Now Or Never.”

But where they meet in the middle seems to be The Beatles – as any songwriter growing up in the glow of the British invasion couldn’t avoid the mop top’s molding – just as it is that band more than any in history that transcends decades of generations, from Brad forward to Scott. These easy going, jangly portraits seem to echo with White Album-era McCartney’s folk-ish bent with Lennon’s Rubber Soul/Revolver era’s chillier atmospheric pop moments, be it Blackbird, I’m Only Sleeping or Tomorrow Never Knows, you can find a father-son’s steady stepping pop ruminations answering back with songs like subdued delicate stargazer“Is All Mine,” the poignant synth-and-brass bolstered easy-rockin’“What My Dreams Convey” or the punchy haze of “Brand New.”