When the night of April 30th closes - it will, if you forgive the melodrama that I feel obliged to attach as a means of plugging the relatively gargantuan live line-up below,...will...extinguish (hooo-boy) the era of cigarette smoke in rock clubs ...in the state of Michigan...for the foreseeable future -

Cuz now it's the law. 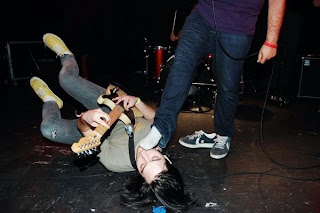 And not just rock clubs - that comes from the ban being applied to bars and eateries - which, if you combine the Garden Bowl and Sgt Pepperoni's - covers both - whilst the 'rock clubbing' noise thing goes on upstairs in the Magic Stick.
Now then, at the Magic Stick - all you pale-ish, jittery, pack crumplers can heave out your, hehe..."cancer sticks" or..."coffin nails"...or one last time, with all the might and bluster of Ol' Smoky, Puff the Magic Dragon and any loose Detroit sewer-lid combined!! ...as the Magic Stick celebrates...or eulogizes?...the end of smoking in bars (for now).
To "celebrate" - the line up on the 30th includes:
Kommie Kilpatrick, (two members of which, pictured above^) - Gardens, - Dutch Pink, - Silverghost and The Hentchmen.
That's a pretty healthy and eclectic line up - and it's intermingled with myriad members who smoke - so I'm anticipating some interesting between-song banter. Will some of them convert and see the good side of it? Or will there be some soap-boxing revolution calls?
Smoke if you got em.
Posted by jeff milo at 6:09 AM