So - in a couple of weeks, Ypsilanti hosts the Totally Awesome Fest - the Spring surged grassroots music mash not that dissimilar from Hamtramck's Blowout, only more tightly compacted into a handful of venues with sardine-packed line ups of dozens of bands. 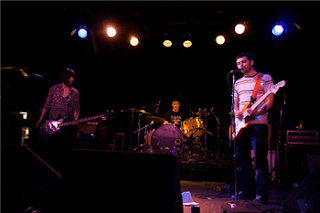 That said - one Chicago band, Hospital Garden, is worth noting - since they're going to feel quite at home here anyway with one of its members formerly contributing to the Ypsi/Arbor music community through the mid-00's (in Bear Mountain Picnic), while they have, in the last couple years, bounced from Dayton OH to Chicago IL. So, the classic late 90's indie-rock-jangled power trio already has that characteristic Great Lakes pop/rock tinge to it's taste - we Detroiters often seem to have no quarrels with our fresh water/rustbelt satellites, since there's plenty of song scribes up here who share similar admiration for GBV-style lo-fi guitar growled pop and the more sleek and seductively style of Chicago's tightly punching pop - whether it's Office, Sea & Cake or raving over Steve Albini.

Hospital Garden are putting out a new full length - the beautiful and idyllic middle ground melding the hard-driving noise-rock mind of Lee Renaldo to the more capriciously melodious mind(s) of the Elephant 6 collective and pulsed by nicely balanced smooth/burnt guitars; the sound forks, bending up to the spacey shining roar of maybe Built to Spill on some twee-revivalist kick and then also leaning towrads a more Sebadoh-ish sort of acerbic scrawl and tumble. Whoowhee.

See them - 4/30 at the Dreamland Theatre

More info on Totally Awesome Fest here.
Posted by jeff milo at 2:14 AM