Singer/guitarist Alex Glendening and I meet on a bright, allergy-inflaming day amidst the opening flickers of Spring. He's just settled into the Ferndale area as he works toward finishing up at Wayne State. Meanwhilem those of us in the amorphous corners of the internet, or the urchins clung to bar-sides throughout the venues, are...or might-be... wondering, just when, they might see another live set from the indie-rock(power-pop) quartet Alex is best known for, 'round Detroit - The Decks... 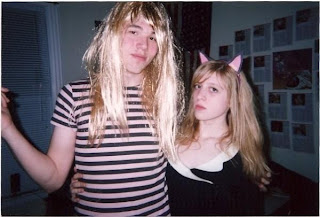 While you can still see him play with the Divine Comedians - you'll now have another chance to see -and hear- his shining rickenbacker and it's unavoidably surfy-toned flare - via his new band...paired (pretty much perennially) with Decks drummer Maria Nuccilli (pictured above)- via The Deadbeat Beat... or, rather, Deadbeat Beat...or...
I drink peppermint tea while Alex does most of the talking...
"We're called Deadbeat Beat...or, The Deadbeat Beat...it's like Buffalo Springfield, where sometimes you can be 'The'..."
So like, 'Deadbeat-dads' but, instead, Beats? Like... Beat-niks? or Beets? Veggies?
"It's beat--like, Beatles, or Beat poet...it's the name of the first song we wrote for the band. And, when we didn't have a name and we booked a show with Best Coast, we were like..." he draws it out the syllables and claps decisively, "ohhh-kay!"
Glendening said this fateful Magic Stick opening slot came from the gracious move by the Stick's main show booker, Anthony Morrow, or as Alex put it, "coolest man around," that being Morrow's post-Fucking Awesome Fest half-promise that he'd do his best to get Glendening into whatever Stick show he possibly could... while drummer Matt Rickle beat Glendening to jumping onto The Vivian Girls recent Stick show with said-drummer's FAWN, Glendening was still more than geeked and grateful to get onto Best Coast's bill - with Nuccilli on drums and their recent rounding-out as a trio (since December 09) with bassist Josh Gillis.
Now in Ferndale, Nuccilli and Glendening, as band-mates and roomates, are able to experiment via the hallowed/valued basement-jam - which, in autumn 09, wound up galvanizing what would become this project - described by Glendening as being "influencedby pop from all across the board: Buddy Holly, The Beach Boys, The Ramones, Leslie Gore, The Ronettes,...whatever. We just want it to have hooks and FUN...just trying to write good pop songs. Some aggressive, others not as much."
So...all this starts in your new Ferndale basement?
"Yeah, actually, it's kind of a cool story." 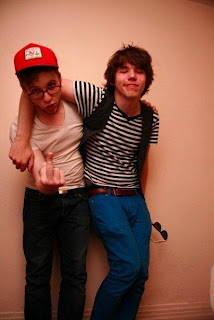 That's why I'm here...
Right. I was writing a bunch of songs and they were floating around, being a little different than the stuff in The Decks. I went through a break-up and started writing songs, then I was like, 'oh-god, why am I writing this sad song, please never-show-this to anyone, Future Self. - THEN, I was like... 'Life's too short to not write a song about pizza.' So..."
Mushrooms and green peppers?
"I don't agree with them, I think they taste bitter, I like any other peppers, not green. Maria and I are really into food and Josh, it turns out, works at a pizza place."

Alrighty...
"I don't know if we'll be playing the song about pizza at the show, but...it exists!"
So, it was kind of a minor epiphany, a refreshed stage of songwriting?
"When you're in a band for a really long time it starts becoming all of a sudden like work; then you're like pinned down and you either gotta work around it or go right through it. I was like, 'Okay, it used to be really fun when we were 16 and didn't know how to write a song - let's pretend we're there again.' College made me feel too old. Let's just be 16 again."
Which is back when the Decks started...
"2003, yeah, but then nothing really happened until 2004..."
To briefly side-track ourselves, what of the Decks? Whats the status?
"Well...um...this is my new band. Um. We're...Hank (Wolfe, bassist) had to move to Georgia really suddenly. He said he's gonna be coming back, so...until he does... I like to see it as, the Decks are kind of frozen in that amber that the mosquitoes that they got to make dinosaurs from in Jurassik Park..."
Wonderful way to put it...remind me to harvest you for a murderous amusement park...
"I found out about (Best Coast) on my birthday, October 13, 2009. I got really into them and ordered a bunch of their 45's...then, a couple months later, my first show in a new band is opening for (Best Coast) at the Magic Stick? Most first-shows are in a basement, or opening for your friend's band and a bunch of band's come out to watch in pity...
A lot of them are in basements...it's a good gestation setting...murky, dank, sweaty...kinda like mosquitoes out of swampy pond shores...
"I've played a lot of basement shows. At Halloween last year, we played a basement show at Kommie Kilpatrick's house..."
That is quite an awesome basement...I'm a fan of that basement...so, my half-birthday is your actual birthday...and thus vice versa
"So yours is coming up...a day before the show....(April 14)"
And Secret Twins are playing it too...
"YEAH"
They seemed to really garner attention/buzz after Fucking Awesome Fest (Aug 09) but one of their first shows afterwards, in Detroit, was with the Decks...
"I saw them at FAF. I was...um, over-served...and all of a sudden I just saw this cute girl playing a flying-V guitar with a drummer on this little shitty stage. I went up to them and a whole bunch of people kinda came up after me and we all just sat there. They played 3 songs and were about to start their 4th when I was like, 'WAIT...WHAT IS YOUR NAME? You're not on the flier!' And (Dina)'s like, 'Oh, we're Secret Twins. We have tapes over there that you can just take...' And, I grabbed one and then everyone came over and grabbed a tape. They're doing good, I'm proud of them..."
We should talk more about Deadbeat Beat's sound?
"It's got a lot of surfy things going on...as most of my stuff ends up happening..."
Because of your guitar..
"Yeah, we (Decks) sounded like surf-rock before I even listened to The Ventures. I like the Ventures and the Astronauts. I just got the Ventures' "Walk Don't Run Vol 2" on vinyl, that's got the guy with the pit-stains on it. That was a good find."
I'm a born and bred Ventures super-freak...it's what my dad told me to listen to when I was 11...it was his favorite band...and it wound up sticking...
My dad was like...'You listen to the Rolling Stones or you don't listen to anything...'
Oh man, that brings up the classic Stones<->Beatles debate...that which has gotten me into roomate-fights in the past...
"I was a Beatles-kid...when I was in 8th grade through age 16. I'd thought...the Rolling Stones are out of tune! Then, one day, I was like, 'Ohh...they're out-of-tune...awesome! There's a big difference between 'The Rolling Stones' and 'The Stones.' I like the Rolling Stones."
Can you talk about your collaboration with Maria?...that's been on a long time...
"9-years in the making. We met in middle school in 7th grade and I insulted her...

How did that work out?
"She wrote this journal entry about how I was so-crass...and rude, cuz I was 13...everyone's like that then..."

Wait, she called you crass first? Maybe she's crass!
"We're both crass...we're like the same thing, we're the same deal except she's got blonde hair."
So, she called you crass...
"I probably said something mean about girls...So, she didn't like me for a year. Then in 8th grade, we had an English class together where we were like the two stars of the show; we would always be clashing, and editing other kids' papers...
Grammar rivals
"Yeah, and we're both English majors at Wayne. And,...so...we hung out one day and it was actually the first day I ever had baked beans..."
Sounds like foreshadowing, you're a good story teller...
"Yeah, so the first day I ever had baked beans. And, I'm pretty sure...not completely sure, but pretty sure, she was like, 'Oh...Alex plays guitar?? I can do that!' and so she started playing drums. And then, in 9th grade, I had bad hair so she didn't talk to me...We would talk in the hallway but we wouldn't hang out. One day I was like, 'Hey, Maria, what's up? What are you listening to....?' And she was like, 'Electric-6...' and just walked by...and I was like" (snaps his fingers) "All-right! We got together all the time and listened to the Strokes and one day started the band (Decks). We went through all the same musical phases at the same time. It was never like, 'Hey Maria..this is a band that's cool.' She'd be like... 'Alex!! I just got this album by a great band...!' And I'd be like... 'The Dead Boys??' And she'd be like... '...YEAH!'"
How much punk plays into it...your playing together, the Decks, et al?
"A lot...a lot. It doesn't always show."
But still... pop.
"Lots of pop."
But, I wouldn't say you end up sounding like the traditionally-perceived 'pop/punk' sound...
"We're just kind of like power-pop. We're just...a couple of weirdos...so it kind of just happens. But we are a pop band, I'll say that every day. We're a pop band. The pop hits are the best. I mean, yeah!!--I have every Destiny's Child album....whatever!"
Even Survivor?
"Especially--Survivor! I was disappoitned by Destiny Fulfilled though. The singles were good. But....I dunno...we're....we were really into The White Stripes and we were really inspired by all the garage rock that was going on..."
But after 9 years of friendship, 7 years of playing together, 5 years of being 'in the scene' and 3 years of college...how does that effect...or make the Deadbeat Beat...feel different, in any way
"Yeah, it's kind of...like, I wanted to breath fresh air into everything. You have a history that you can't completely delete, but I'm trying to make it as fresh and new as possible."
Aside from history, what about the future?
"We're playing with Best Coast, which is awesome, they're one of my favorite bands right now and the drummer, Allie, from The Vivian Girls is drumming with them. I hung out with her at their (Stick) show and she and I, apparently, have really similar tastes in music."
And...recording an album?
"I think we might put out a tape..."
That's the thing right now... hmm... Tape--Decks
"Yeah, that went all over...it could be anything (Decks)... some people thought we were really into skateboarding...we weren't"
~
Alex would email me later...he and I now being linked somewhat astrologically by half-birthdays: "The following people were born on your (my) half-birthday (Oct 13): Paul Simon, Margaret Thatcher, Nancy Kerrigan, Ashanti, Sammy Hagar, Marie Osmand. It's important to know these things."