Frank Lee came up to his longtime musical collaborator and co-worker at the Natural Food Patch (in Ferndale) said, essentially, ‘Hey…Jason…what if we started a band that was just us…but all improvisational.” Jason Worden, the bass to Lee's drums, had a few reasons to accept the offer – not least of which was that their main project, the caustic spook spark power trio Red China (with Mike Ross) had come to “question-mark-hiatus” in Spring 09, but also, Worden and Lee, they both acknowledge, have that “weird telepathic thing going on,” as Lee puts it, “where we read each other’s minds.”

“When you’re the rhythm section with someone for a few years,” says Worden, who also plays with Duende and performs as Kindle, “you end up being on the same page or you end up killing each other.” They’re also roommates – so, sheesh, any shared brainstorms can potentially always be boiling over the pot. Even then, the story goes back further. Both of them, before actually meeting, traipsed the stage’s edge of many of the same local psychedelic shows, eventually bumping into each other in and out of the booth of the school radio station at Oakland University (where, as it happens, Mike Ross also managed for a time).

So…now…we have Forget, the pair’s latest experimentation: an entirely improvised, entirely thrown together, fundamentally transitive orchestra of sorts…or, as PJ (from the Lager House) put it, after their first show last autumn…”a grand cacophony.”

The set up: …..is….kind of….anything. Are you a musician (or even not,) and available for a Forget show? 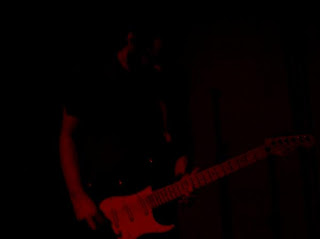 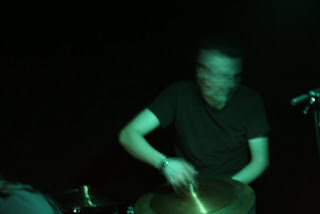 “Like… ‘okay – we have this show…let’s call everybody we know and see who wants to do this…’” Lee recalls the first booking they got – an opening at the Lager became the opportunity they were looking for to finally flesh out this symptomatically amorphous jazz-inspired all-but-the-kitchen-sink conjuring of a communal groove. Members from Duende, Hi-Speed Dubbing, Marco Polio & the New Vaccines, Rootbear, Pinkeye and more have contributed – spanning psychedelic, shoegaze, krautrock and acid jazz - …but, then, by spanning, I would say that, through their 20-minute songs they sporadically fall into these flavors for 2-3 minute spans and then eventually, slowly, morph and juke and slide their way into something else.

Sax, guitar, bass, drums, violin, and shamanistic vocal howls are just some of the things brought to Forget’s table.

“Forget has never had a practice,” assured Lee, who also performs with Jura.

And that’s just the idea.

Both of them have contributed to the similarly calamitously ceremonial simul-surge of the Pinkeye orchestra – but with that 10+ member affair, the “plan” is to at least start with an expandable cover song. “(With Pinkeye, on bass),” said Worden, “I hold it down and try to keep things steady and with Forget I’m nowhere near the backbone of anything. So, I’m following everybody else instead of people keying in on me for what key we’re in…”

“I like how keys are chosen in Forget,” Lee chuckles. “Everybody’s like…all-string-instrument players, and they all ask, ‘What key is it in?’ And somebody goes… ‘Why not -A-? A- sounds good.’ And then, ‘A it is!’”

They recall the particularly barrel-rolling spilt-out splatter of the Blowout set, where Steve from Marco Polio and Jamie from Druid Perfume, two distinctly fervent yowling full-body-freak-out vocalists, climbed all over the venue and each other…

“And that’s the fun,” said Lee, “We know these guys who don’t know each other, so what would they do together? That can happen every night.”

“Every show,” Worden says, counting their last as their 8th officially, “someone was introduced to somebody else.”

The band has four albums ready – forging their own subsidiary label underneath Loco Gnosis Records (the Detroit based musical family under which Worden and Lee have both been raised in this modern scene, both of them now veritable big brothers in the labels household.) Forget records will release each band’s performance – since it is a wholly unique moment in time that will never happen or be re-played the same way ever again.

- The boys are now curating "third thursdays" at the Berkley Front - so keep your eyes peeled, ears open and calendars marked.