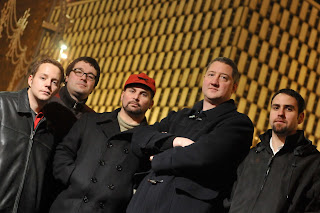 The thing is, for Bissa and singer Dennis Miriani, despite their 40-something age, this, all this, the shows, the records, the scene, “…it’s still new for us,” Bissa said, “the idea of having a 12-song vinyl record is just the coolest thing in the world.”

Humble, heartening, earnest, and unabashed about their love for “the fun of” playing, Spitting Nickels formed when Bissa fatefully had a music-geek-rant with Eddie Baranek (of the Sights) that galvanized Bissa’s past growing up with fellow De La Salle class of 82 grad Tom Furtaw and sharing a passion for a wide variety of rock – from Brit Pop to Manchester punk to 70’s blues rock, to AM Gold to 80’s/90’s power-pop. In 2007, Bissa was ready to experiment and Baranek, similarly, wanted a chance to try out drumming – and, cosmically, Furtaw came around willing to finally try out this pie in the sky power pop band he and Bissa always mused about starting. Furtaw, tragically, passed away towards the end of a live set opening for Blue Oyster Cult in August 2008, suffering from a heart attack. The band had been together just over a year. That autumn they released their debut EP, 5 The Hard Way.

Baranek, ad-hoc guide to Bissa/Miriani’s (re)entry into Detroit music, moved on last summer to concentrate fully on the Sights – leading SN’s keyboardist Ben Borowiak inviting his friend Jamie Gawecki to take over. (The band also includes lead guitarist Chris Brosky). “It’s like a family member leaving you,” said Bissa. “There’s no doubt that none of this would exist without Eddie, so it’s bittersweet. Jamie’s got a great feel, the thing has moved from really straight 4-4 rock to a little more of a funky rock thing.”

Now, after a summer’s worth of writing and recording (and developing older songs, including one penned by Furtaw and another penned about Furtaw), they will release Stop Don’t / Yes(recorded by Baranek’s go-to engineer, Jim Diamond (the same guy who recorded the White Stripes…and, 5 The Hard Way, too). It features hard rolling rockers, smoky psychedelic blues, and some disarming softly brushed love-song waltzes. Saxophonist Brad Stern was brought in to add a bit of a melancholy to a Furtaw-inspired song aimed to capture “the madness of losing a friend.” Stern’s touch makes “the song into a real statement.” 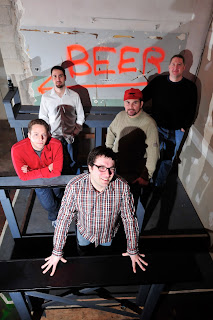 “We worked very hard to sequence this thing for vinyl,” said Bissa. “As listeners of vinyl growing up, you always knew there were special places on records; the leading song is supposed to get you in and the final one is kind of the “Day In The Life”/”Super Gravity” type song.

“Our goal is to have this record be a calling card,” said Bissa, “to be able to open doors for playing where we want to play. We are completely up for going to Chicago, or doing Cleveland. We know New York City might not be calling Spitting Nickels, but we want to use this as an opportunity to meet great people. Because, it’s been this complete adventure into a whole new world of going to places where we wouldn’t go otherwise.” (The band heads to Toledo to open for the Sights this month). “And,” Bissa concludes, “just, having a lot of fun. Because, we really really enjoy doing it.”