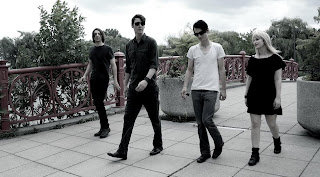 
In all those guitar-gored, echo-pulsing, feedback roars, one never loses the clear clap of the beat or the coaxing coil of the melody.

Fur’s defies the lo-fi, gloomy, washed out aesthetic of shoegaze rock and also the freaked-up-firestorm, trippy aesthetic of psychedelic. Pedal-wrung, winding guitar roars and big booming bass may be intrinsic to their dark, aggressive rock, but the group (singer/guitarist Ryan O’Rourke, bassist Michael O’Connor, drummer Zach Pliska, keyboardist Johanna Champagne), come from humble beginnings: basement writings between O’Rourke and O’Connor where “we didn’t even have amps; we had no idea about guitar toning or about pedals…”

They’d met at Champagne family gatherings (as both dated respective sisters, Johanna and Jennifer) and wound up “learning to play our instruments” together, “meeting at Radiohead,” and enduring “a series of craigslist misadventures (to find a drummer)” as they pieced together what would become Fur, a propulsive, staticy-shadowed synth-dressed rock that culls melodic sensibilities from new-wave and post-punk but an edge a more metallic, industrial rock provocations.

“At that point,” said O’Rourke of mid 07, “it even still felt strange for me to play a guitar with a strap.” O’Connor said he and O’Rourke had both played for a while, but had never joined bands. “Finally, we found Zach, that’s when things really started to take off,” said O’Connor. “We were still bad though,” quips O’Rourke, “Zach was good, but Zach’s always been good.” Pliska came with experience playing hard rock, grunge and hip/hop, and had equipment that could accommodate needed demoing at practices.

“Stiff, uncomfortable, rigid,” are words thrown out to describe the trio-completed practices and their autumn 08 debut. The three were essentially getting to know one another through their instruments.

“For some reason I was under the impression that Detroit was a very sort of blues-based, garage-rock, guitar-bass-drums kinda outlet,” O’Rourke said. “So, for the longest time I was avoiding making aggressive, darker music.” Through high school and college, O’Rourke wrote/composed constantly, “a lot of sounds and textures” onto his computer. “I listened to a lot of Nine Inch Nails and I think it was sort of returning to that influence and finally coming to terms with it as what I do, and what I like, it was not being afraid…”

With Champagne on synth, O’Connor said, “it gives us a different feel. You have this darker, more cluttered sound then you’ve got this nice, clean synth on top of it.” The synth is key to Fur’s enduring melodic sense, conjuring “those great 80’s groups.” O’Connor and O’Rourke talk about their earlier musical discussions, which Cure album’s better, Disintegration or Pornography, or the charm of Modern English records, the elegance of, yes, even the Carpenter’s…John Denver even. 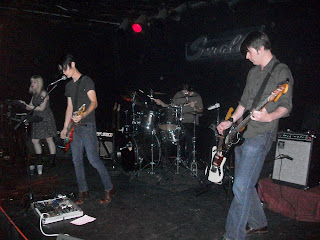 O'Rourke, Pliska and O'Connor recorded a debut 3-song EP at Tempermill. Before and after their studio time, they’d had some personnel shifts. The pedals started blooming at O’Rourke’s feet after it became apparent that they’d forge on as a trio – what started as a means to fill space (as one guitarist) evolved into a characteristic sonic aesthetic. Perhaps a particularly “pissed off show” in December 09, where each carried a bit of fleeting irritability, they shared a musical exorcism that seemed to galvanize the dark aggressive edge they’d been seeking…with O’Rourke nearly breaking his guitar on the stage, Champage watched, wide-eyed and impressed. She would later join the band, first as practicing for a one song cameo contribution, then to three songs…then to becoming a full collaborator in shaping songs at practices.

The trio recorded a 3-song EP at Tempermil with Jim Kissling. Before and after studio time, they’d had some personnel shifts.

The first EP is clearer than the follow up. A taut sound only lightly haunted by synths or scorched with feedback – was layered with a rougher, edgy hew for their latest: Devestate the Details EP.

Thus was the sound they brought to this year’s Hamtramck Blowout – what O’Connor calls “our first non-friends-and-family show. Blowout was the kickoff for everything that’s happened for us in the last 6 months, from EchoFest to Fucking Awesome Fest, to Dally…”

After they play the DIY STREET FAIR – they’ll pull back, and return to the basement, the place where the three men originally honed their sound through 09, and “get back to the music,” as Pliska put it. “That’s what we’re trying to do now,” O’Connor continued, “sit down and try to get back to the mindset of before anyone really knew who we were…”

“I don’t think anyone really knows who we are though,” O’Rourke quips.