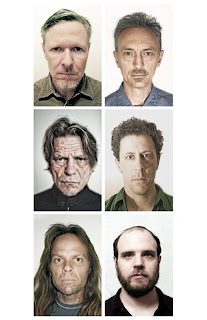 “This is not a reunion band going out to play their old record or something; I’m interested in making things happen.” Swans’ guitarist/singer Michael Gira has been making music for 30-some years, as a solo artist and also under the Angels of Light moniker.

Having “reactivated” his preeminent project, Swans, last January, he continues to seek sonic transcendence through persistent shifts in style. He’s not one to look back, he’s not “a journalist or historian,” looking to reestablish a Swans narrative, whatever-that-may-be based upon fans both passionate and casual and their perception of the NY-based group’s work in the realms of dark, raucous post-punk rock and a visceral, frightening ambience.

“…fighting expectations” was what originally wore the musician/writer/artist into “retiring” the seminal NY-no-wave era project, (started in 1982 alongside others as Sonic Youth) back in 1997. This month heralds, not a return, as Gira would clarify, but, merely, a new Swans album, with My Father Will Guide Me Up A Rope to the Sky (out on Young God Records, -which was also founded by Gira in 1990.).

“For me, which shouldn’t matter to any audience member—because it’s not about me, it’s about the music, but,…for me, personally, it was a major kind of challenge and personal upheaval to reinvigorate Swans. It was a monkey I thought I’d killed. But, really, I had to confront my demon brother, and embrace him. What I’m doing, and what I’m wrestling with, with this whole concept, has given me a new sense of purpose. I love it. Experiencing these overwhelming sounds again is just tremendous. To me, it’s like a religious experience. But, I don’t mean to be lofty about it. It feels like it’s really transcendent to me, when I’m in the midst of it, and…I think we’re all that way.”

Swans are known for devastating, battering-ram crescendos, soul-shaking cacophony and a hauntingly beautiful balance of an aural chaos upon an arresting rhythm and veiled melodies. Gira said that the band (including original members Norman Westberg along other long-time Gira-collaborators Phil Puleo, Chris Pravdica, Christopher Hahn, Thor Harris) have been rehearsing all month, galvanizing eight songs (four new, four older) into fifteen minute “tremendous” “marathon(s)” “…like going to a sweat-lodge on LSD.”

Gira said he was worked through considerable writer’s block with these latest songs. He originally thought they would wind up continuing his gothic folk project, Angels of Light, but he found that prospect “underwhelming.” “I’d been harboring this notion of making this louder, eruptive music again. And I thought: Well, why don’t I just make a Swans record?” After that, he gathered his cohorts into a factory space to then explore and sculpt each piece through exhaustive rehearsals lasting 12 hours each. 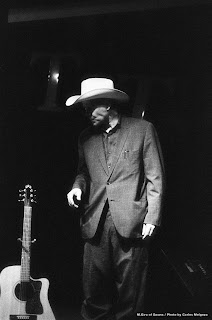 “I don’t just record a band and make them sound like they did in the room,” Gira said, “that’s the starting point. Then, as a kind of producer, or whatever the hell I am, I think about how to build it up sonically, and make light and shade and dynamics and drama and just really make it go for the money shot and we just keep working on that.”

From a band known for its instrumental might, to dabbling in spoken word and then making intimate, minimalist, vocal-informed folk music, Gira spoke about the “constant tension” between words and music. “(Words) inform the sound.” He reiterated the personal challenge of finding the right words for these latest soundscapes. Starting out, again, with Swans, Gira said, feels comparable to when he first started Angels of Light, ten years ago. “Sort of like a new challenge, a new risk. I like it when things are just on the edge of falling apart. When you’re not certain where you are and you have to really fight to make something out of that. It’s really intimidating to do this, for me, personally, again—not that it matters, it shouldn’t, but, that’s the kind of thing that keeps me interested in working.”

The Swans are on an ambitious tour that will stretch the next year and a half. Gira said he’s looking forward to the next album. “I want to make the songs more purely, first, and foremost, involved in the sonics of it and worry about the words later.”