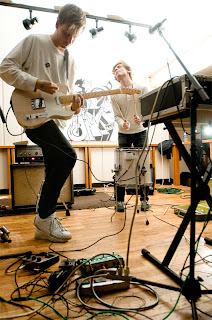 Stream a track from Spring St
- "Poolside" - from the Fader

Fred Thomas says he feels people are likely sick of bands that don’t throw them for loops. And that empowering climate is ideal for the wintery/summery blend of his (one of many) project(s), City Center – through which, paired with fellow Ann-Arbor-ite Ryan Howard, they stir up clattery bemusements of fried, fuzzy, acoustio-lectro pop songs that sound transmitted from sun-baked transistor radios left atop futuristic jet-cars languidly hovering over effervescent ponds of rippling reverb waves enveloping each other as synths and scraped guitars are ever present in the ether like the soft singe of setting sunrays.

Their 2009 debut shifted track-to-track, fuzz-layered 3-minute pop to more caustic dissertations, considerably less traversable then their past works – thus severing limitations of one genre and severing expectations from past works. “I’m not really concentrating on: ‘Okay, here’s the noisy part and here’s the sweet summer jam. I’ve always thought about music in terms of maximized sound possibility; whether it’s a full orchestra of strings or 17 different tones of noise at the same time. It’s all as many sounds as I can fit in there and still arrange and organize. If this song sounds like Wire and the next sounds like Beach Boys, fuck it, who cares! I like that.”

Thomas is the perennial Arbor/Ypsi sparkplug/collaborator/experimenter – best known for leading chamber-pop-collective Saturday Looks Good To Me; Howard played in folk-leaning A2 acts Canada and Drunken Barn Dance. City Center started somewhere in late 2007 in Thomas’ NY apartment (he moved back to A2 in spring 09) as a reaction to the strange and encouraging art energies sutured into that otherwise hectic environment. Howard became more and more involved through 08 and is now a full copilot.

“I was talking to a friend in Chicago, we’re both in bands, he was in Chin Up Chin Up and we’re reminiscing together, drunkenly albeit, about 2002-2004, this small window where we toured all the time and were in these mid-level bands that no one had really heard of but we also weren’t completely unknown; that was the era of the: ‘Well, what’s your band like? Well, we’re like…the Strokes! Oh, cool, we need another band that sounds like that…or that sounds like the Rapture. We need a band that sounds like this…’ I think that era is done. You can’t really describe anything right now…if it’s actually good.” 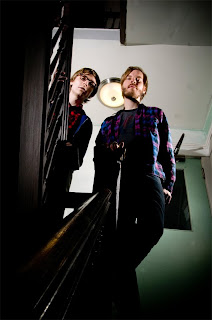 Rightly or wrongly, SLGTM was a band interpreted by means of journos or even listeners ticking off various palpable influences that seemed to be worn on each of its pop pleated songs: Beach Boys, Phil Spector, Belle & Sebastian, etc etc or what-have-you.

“I can’t honestly say that I didn’t think about influences or trends at the time," said Thomas.

"Being a band from the Detroit area in 2002 meant that you were very much conscious of your place in the garage-rock-schema. I did a tour playing bass for The Sights and came back from that and wanted our band to sound exactly like the Sights because I loved playing with them."

"But when it came time to make another record, I thought, well, I also like The Zombies a lot…maaaybe I wanna sound like that. Every single micro-second of most of the music I played in my mind is charted out as my various queues taken from other bands, because I am such a music fanatic. But, to answer your question succinctly, I don’t think I ever thought of it as: ‘Oh, because there’s a band that’s doing really well nationally, we have to be the Michigan or the Detroit answer to that band. Because, I never really felt like there were a lot of baroque-pop bands in Detroit in 2002…”

City Center released their self-titled debut full length in late 2008 – a collection of much of the subterranean serenities and kaleidoscope clangs and breathy fuzzed out vocals – songs mostly developed by Thomas with Howard’s augmentation. This month, via Quite Scientific (an Ann Arbor based label) they release the 4-song one-sided silk-screened vinyl record, Spring St.

“The music is four songs; I did two of them by myself, Ryan did one by himself and we collaborated on the last one; it came together seamlessly, almost like this dual-solo project. It was a very quiet, staid kind of rumination on our summer, because we recorded it this summer when I was living off of Spring Street (in Ann Arbor). Every day, I was walking around and Spring Street is actually the highest point in Ann Arbor, so you can kinda see a skyline from this park at the top of it and I was going there and looking out, thinking for hours and I’d be writing song ideas down and writing lyrics down and we just came up with this really meditative, sweet, thoughtful record as a result of it.”

Thus, the relationship with Howard and Thomas has strengthened considerably – through recording and rigorous touring. The two dudes pack their synths, drum machines and guitars into a van and wheel around the country—till now having self-booked everything. “At this point, if me and Ryan are in the same room, we make the same joke at the same time, we’re finishing each other’s sentences without really being that much alike. We’re actually extremely different people.”

“(Howard)’s presence is bigger than I could have imagined it to be. When it started, I kinda really pushed him, that, if we’re gonna do this I’d like it to be something where we’re both equal parts. I think this when this new record comes out, it will make itself really clear, it sounds a lot different than the last record, there’s so much more of Ryan in there.”

The forthcoming full length was recorded with Chris Koltay, here in Detroit. “And I couldn’t be any happier,” said Thomas, “with the results. Chris, in particular, is one of the biggest gifts the band has gotten and he made it sound really incredible.” They’re aiming for a September/October release.

I prattle out a metaphor of Howard’s joining City Center, coming aboard his experimental pirate ship as a stowaway, working his way up to first-mate, eventually redecorating the galley a bit and then nudging the wheel and lurching the mast a bit more to starboard until finally being pinned as a co-pilot.

“Oh, definitely,” Thomas says, “or, more like, if I fell asleep he actually re-routed the ship.” We share a chuckle. “All the songs we’ve made as a duo have come out of chance-jams.” Howard, says Thomas, is more apt to fiddle around with myriad tones and melodies while he admits he has a more meticulous, abstract or even overwrought process. “Two completely different approaches have somehow resulted in a really good duo.”

Thomas said he can’t wait for people to hear how hard they worked with Koltay, when the record comes out in the fall. I poke at him that, by that time, they’ll probably sound even weirder or more varying now, then ever. “…probably!”

Spring St. is available now (limited copies) via Quite Scientific.