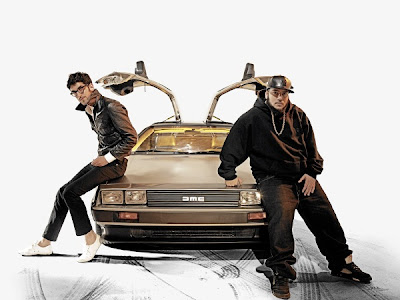 August has arrived and this long, hot summer is winding down. But not before we break into one more sweat drenched good time. For whatever reason, Montreal's Chromeo have skipped Detroit while touring their first two albums (She's In Control, 2004) and (Fancy Footwork, 2007). It seems odd, being that Detroit has plenty of electro-funk-techno history and local acts such as Charlie Slick and Champions of Breakfast have put their own spin on tongue-in-cheek synthesizer jams. Then again, the Motor City has finally shown up to the electro-future with the Chevy Volt -- which seems to have come with more of a thud than a spark.

P-Thugg and Dave-1, a Jewish and Arab combo (what up West Bloomfield and Dearborn!), have been musically ahead of the curve for six years and change. Tune into the Top40 (or really the Top12) radio stations these days and you'll hear "electronic dance" tinged pop music from the likes of will.i.am and David Guetta that sounds cribbed from some of Chromeo's earlier works like "Needy Girl."

But Chromeo remains raw and authentic while finding ways to tweak their nostalgic formula. The latest songs from their upcoming third release Business Casual are sharper than the cutthroat Wall Street bankers. And while Kanye West and Drake have recently turned the auto-tune into a Kleenex box for sad love songs -- Chromeo are here to charge our batteries up.