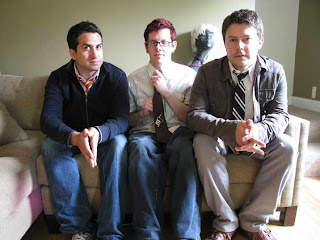 "It really is about that," singer/guitarist Steve Clausnitzer (of The New Green) said, unpacking the Ann Arbor based collective's latest, Elaborate Maps. "...just, about trying to forget about the past or reaching to the future as some sort of thing where you'll be happy at when you get to it, someday. Rather than actually being happy in the present and realizing how wonderful it is..."
Clausnitzer and the band (with recording core of Ben Kessler (keys/trombone), Brian Goodwin (lead guitar) seem to be going through a period of accelerated growth, rationality, philosophic reflection and, above all, bonding...(of the chemistry-type), as the three hunkered down throughout the winter season between Clausnitzer and Kessler's basement studio set ups and crafted the album together. "A true collaboration," beamed Clausnitzer as he remarked upon the musicality of his comrades. "There's a whole lot of improvisational stuff; I'm a writer, I write everything out, I'm not that much of an improvisational musician, those two are really fantastic improvisational musicians so we work really well together." 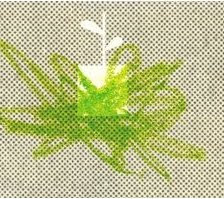 The closing track on the album, those skeletally sketched by Clausnitzer, is pretty much entirely improvised. "It kinda symbolizes everyone's individual contributions to the album," said Clausnitzer. "It's talking about life goals. There's a line: I wish for once in my life I could go where I want...; 'Elaborate Maps' sums up a lot of the album. Songs like 'Grow Up' captures the way your heart sinks when you hear a kid say that they 'can't wait' to grow up... A lot of the album deals with that; the power of now, being in the moment and enjoying where you'er at."
Elaborate maps as the invisible not-yet-predetermined paths we all follow, Clausnitzer said, "to get to...the actual moment, that's what we're all trying to get to, we just don't know it. If we actually appreciate where we are, in the actual moment, then that's where the actual happiness is..."
All of this, set to their characteristic blend of stately baroque pop and easy shuffling hybrids of alt-country twang, indie rock vigor and jazzy adventurousness.

They release Elaborate Maps online next month - find info here. You can see them live, 9/24 at the Savoy in Ypsilanti.
Find an album here.
Posted by jeff milo at 3:54 PM