How to gracefully disappear in a room: The National @ The Royal Oak Music Theatre - 8/3/10 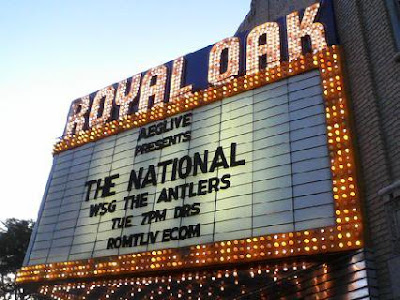 It was the night after the primaries in Michigan. Matt Berninger, with the lights above smearing our eyes in red and blue, sprinted through the crowd screaming "I Won't Fuck Us Over!" -- the triumphant yet cautious chorus to "Mr. November" - a song that has always reminded me of President Obama's campaign promise to bring change. Did he lie?

Does it matter? What that Prop 8 has been overturned? Or that "Cheeks" Kilpatrick was shown the door. Maybe Kagan will exercise her "academic" legal mind and overturn some of the injustices in this country. Oh, but no... Nothing really matters, now does it? You want to read something real? Don't dare pick up a newspaper... let alone a Free Press or turn on Fox News Channel. We could've elected Ron Paul. We could've set fire to the banks on the day the bail outs passed. We could grow some balls. But we don't.

You're a coward and so am I. We spend... what... the studies show is too much time on social networking sites and not enough getting to know our own neighbors. So why don't you pick up the fucking phone.. no wait.. drive over and see some of your friends and family.

"VENOM RADIO AND VENOM TELEVISION///I'M AFRAID OF EVERYONE."

I became quaint with The National when I first heard "Mistaken For Strangers," because, it spoke to my own feelings of social isolation in this country, town, state, existence, internet, etc. It was a throbbing song that recalled Turn On The Bright Lights-era Interpol... but with more balls perhaps. "You get mistaken for strangers by your own friends, when you pass them at night under the silvery, silvery City Bank lights" Matt Berninger yelled at me. He was telling me off. Because I was lonely and preferred it that way. Treating reality as my own bizarre chat room.

In a cubicle, I started to like this band more. It was during the fall of the Wall Street collapse that avalanched down through Main Street. I was working in a corporate world in which my life began to imitate Office Space. And every day, I would listen to The National on my iPod because their gloom was soothing. I was in love with someone who didn't love me back. It was a very cold winter. I slushed in the snow, wearing layers of clothing. I was "so far around the bend."

"I HAD A HOLD IN THE MIDDLE//WHERE THE LIGHTNING WENT THROUGH//I TOLD MY FRIENDS NOT TO WORRY."

The National sold out the Royal Oak Music Theater. I had a pain in my stomach so I couldn't stand in the pit the entire time. I went up to the balcony... and after asking countless people if "is this seat taken?" someone allowed me to sit down next to them. Lonely world.

Berninger, with his baritone snarl, greeted the audience and the band dived into "Runaway" from their latest, High Violet. From far away, The National were pure energy, raw emotion. They sounded loud. They crackled. Thunderstoms. All hail our pity ridden world. Sometimes Matt Berninger's deep bellows just sounded like an indecipherable howl.

They played for nearly two hours. I decided to move closer. I wanted to be engulfed in this. I wanted to connect with despair. The band performed all of High Violet in addition to favorites from The Boxer, Alligator and even went into a bone-chilling splatter of "Available," from Sad Songs For Dirty Lovers. This band does have five albums worth of material to choose from.

The closer I got, the better it felt. But not closer to people or even the band. Just closer to hear the words - to maybe examine how the lyrics personify something about me - the gospel of generation ghost.

To a packed audience of people I didn't want to even rub shoulders with because I was afraid I might get an infectious disease from their sweat... we were kindred spirits that worship these grim reapers. The National could've sounded better. But it was about the songs -- the message that there is no message anymore. We just exist. Alone in this world.