Whale-o-copter: An Interview with Marco Polio & the New Vaccines 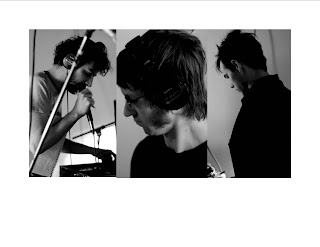 All Hail the Imaginotron: Marco Polio & the New Vaccines

“It’s mutated a lot. Sometimes it just evolves out of nothing.” Singer/keyboardist Steven Puwalski is speaking of the band, the happening, the imagination galvanizing, (metaphorical whale), known as Marco Polio & the New Vaccines – an electro based, dance incurring, pop-interested art-punk band that has entered what he considers, its “10th stage.”

“We have songs now,” keyboardist/guitarist/singer Michael Langan offers. This is, actually, an evolution – live shows through their first full year (2008) were blocks of interconnected “movements” of sparse, yet strident, garish techno-y something’s with yowling, sing-speak, beat-boxing vocals and modulated improvisation.

Langan says he’s “getting in the habit of writing songs without the drum machine, now that we have Scottie.” Scottie Stone, brawny, bespectacled, adaptable, tightly locked, added his blond-topped human stomp to the synthy, punchy sound, with his kit set behind the jet-black haired sunglasses-shielded Langan conjuring guitar roars with the dark curly mane mic-holder Puwalski spilling all about, covering himself with honey and feathers and binding the powerless crowd with yards of yarn. 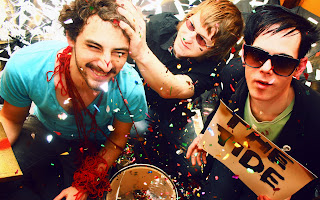 “We realized once we had a drummer that we should probably string ourselves together a little bit more,” Puwalski says of honing the material and performance into a more comparative palatability.

“It helps,” Langan says of Stone’s joining, “it’s coming along a lot more strong, more aggressive sounding. The drums over modulated drums adds new skin to the band so, basically, we’re not just a circulatory system in the skeletal structure, we’re not almost a full living breathing human, an animal of some sorts, probably a whale actually.”

The initial pair met at open mic’s, one into shoegaze and punk rock the other into hip/hop. “When we started (MPNV),” Langan said, “we wanted to create live electronic music without computers. So far, we’ve managed to do that, I’ve avoided buying a Mac Pro for some time now. We’re trying to be as live about it as we can.” 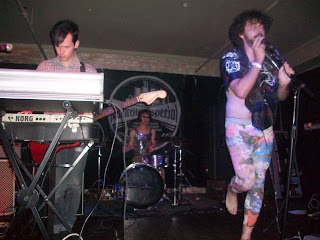 So they’ve grown slightly away from technological reliance with Stone and are now constructing discernible 4-minute songs, sleekly balancing electro-rock flavors and danceability. No longer these untamable noisy blocks as before. “We’re (still) untamable in the recording studio too,” Puwalski admits, referencing their work on a forthcoming album.

In early spring, they released a single recorded with Jason Worden (of Forget recordings) and have now set to a DIY-diligence at Langan’s home. Live song interpretations were always so unhinged, meandering and malleable – that it’s quite the task to capture it in a traditional recording sense. “It’s very lo-fi,” so far, Stone said, but “still fucking fun, though.”

“The recording process is delicate,” Langan said. “It’s a new creature to be tackled and we need to find out what creature this is; I think it’s a whale, damn it.” – “Whale is Marco Polio’s spirit animal,” Puwalski confirms. –“They’re very majestic” Stone remarks.

Sliding into a structure, not dissimilar from their new-millennia-no-wave influences like Yeah Yeah Yeah’s, has meant some organic fitting into a more “poppy” sound. “We want to be fucking with people more,” Puwalski said, already known for “chasing” or running through audiences, “but we also like the feeling of the poppiness. I still like no-wave’s sneering…”

“But it can still be accessible,” Stone shrugs.

“This whale,” Langan concludes, “Whale-o-copter if I may, is evolving, it’s grown dorsal fins and now it’s starting to grow legs, so who knows where it’s gonna go.”

The Imaginotron and You, their proper debut, hopes to be unveiled this autumn.

Check Real Detroit's current issue for this interview
Posted by jeff milo at 2:20 AM