Chapter Two: Without us, Song is nothing

~ "I'd like to see it explode into a million radiant hues/ to supernova this moment into a new civilization..." (Richard Wolhfiel, The City is Vast)

There will be more...that's just it.

I woke up this morning, though, feeling disturbingly inspired to start this article out with the hyperbolic, and achingly pulp crime novel tinged hook of:

I must kill Jeff Milo.

....and then, the ensuing narrative would detail my sinister and exacting plot to starkly diminish the ardent glow that all of you wonderful, creative souls cast upon me. That said... if I haven't told you already, thank you. Seriously... I had no idea. If I haven't met you - I will soon. I wanna hear what you have to say, and to sing...

So, please, dear reader, revel with me at the farcical facade of the journalist's inclination for huffing hyperbole with those opening leads, hooking you with such melodrama. Of course, it's not Jeff Milo I need to kill. That was merely my knee jerk reaction (and halfway sensible, considering I was probably half-alseep and all the worst ideas come to me, honestly, when I'm just waking up...).

With all of your own personal flashlights flickering back upon me, from last night, it was like the spotlight on the spotlighter. I couldn't believe the electricity in the room and the sentiments pouring forth... such a light, shined back upon me... I felt I might disintegrate, having not been used to such attention. And maybe I should disintegrate...

Like, reinvent? Or something? Transmogrify my identity... Then I just started getting unreasonable...as often happens pre-coffee... And I got all burn-the-crops-and-salt-the-land on myself.

And I almost considered scrambling for some ill-advised reinvetion... and then, come back as something else...? Or merely reform my essence as a...what? Documentarian? Or just as the fly on the wall, or merely the regular at the stage's-edge? Maybe I just need a clean shirt?

Or a new pair of headphones... all the better to hear you with... 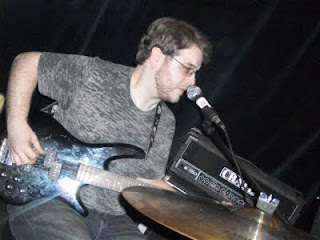 But I never had to kill Jeff Milo, (...I apologize for all the morbid metaphors-- after all, 27 is an ominous age, as any one who recalls Cobain, Morrison, Joplin or Bryan Jones will acknowledge)...

No...in some weird way, I had to help kill music journalism. Any knee-jerk panic that last night represented some sort of coming-up-for-air and realizing just how far I'd waded into the deep end of the musician's pool...

'Oh, no, this just isn't right... I need to be out, in the life guard's role...blowing a whistle of judgment and throwing scrutinizing inflated-rings upon their heads to make them all to self-conscious that they're swimming too deep themselves, or that they should be ashamed of rough-housing, splashing or canon-balls...'

That old sense of just sitting down with the band and tracking their meandering words only to snip out the interesting if sometimes mis-representational quips later on... That whole perfunctory press thing of putting out the blurby piece on the buzz band. I wanted to obliterate that approach...

But last night... it became clear that, every so often, I'm calling back "Polo" to some other band's shouted: "Marco!"

But it's too invigorating to resist.

While you're here - check out the krautrock conjuring, headswimming fuzz and dreamy-(nightmarish) drones of Mother Whale; the shambolic charm and disarming soulfulness of illymack; the rousing rock from the igniting Macrame Tiger ensemble; the reggae-spliced, funk-flared dance rock of Electric Fire Babies; the beautiful, shuffling folk musings of Golden; the mellifluous earthy drifts of Legendary Creatures...

"I believe we are well into the next stage..." he wrote--and spoke last night--concerning the city as a steadily birthed and booming galaxy, with precious potential, exploding along the stages of a Star.

"...the next stage where we are causing a series of nuclear reactions, forming different elements in shells around the core. The shells and elements being the various scenes that have cropped up and have rooted themselves over the past decades..."

"If this is true, then I cannot wait for the core to collapse."

"You make the change in the face of this failing system. Wake up and breathe your breath into the lungs of tomorrow."

~ Bonnie "Prince" Billy - exerts from "The Sounds are Always Begging"

"...always choose the noise of music / always end the day in singing" 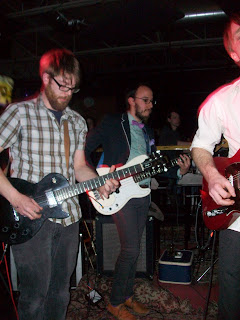 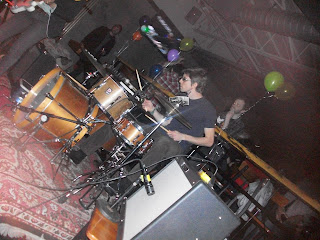 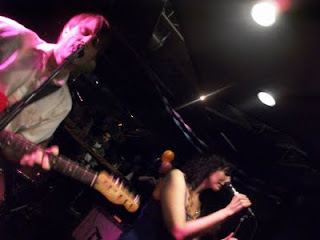 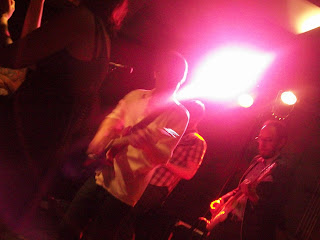