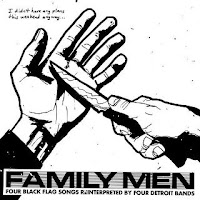 Four bands... ...for the four bars in the iconic hardcore band's insignia, four cold, staid bars that hint at bellicosity and badassery...

have thrown together their four respective Black Flag cover songs and are releasing them on vinyl - a one time pressing available to the first 250 people who come through the door (with $10 cover) at the Magic Stick Lounge on January 26th...for a live show featuring each punk-preserving participant.

The only way you get a copy is if you're among those first 250 attendees... The noisy internet "highly" advises you to find pre-sale tickets... either at the Garden Bowl in Detroit or UHF in Royal Oak. - More info.


~
**Still here? Still bored?
Seek some transparency and follow the helpful Fact-Checking of Obama's State of the Union Address via the Washington Post.
~
***While you're at it - why not plan a drinking game for your forthcoming Oscar Party... ...I've been ready to declare this ceremony a joke for years but the hopeless cinephile romantic in me kept holding back... I think I'm done... Thanks Slate.
Posted by jeff milo at 9:36 AM