I'm still computer-less... lily-pad-leaping to a range of temporary devices, even potentially highjacking my friend's laptop while she's down in Kentucky... ...that doesn't mean I can't settle in and take in some music and then ramble about it...
~

Like, say, the gravelly guitars and spilled-about percussion of alt-rock revivalists Bobby Electric... 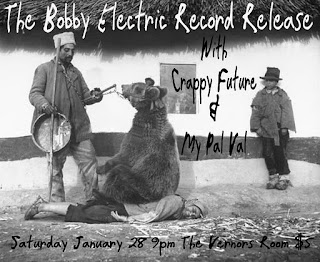 Low, raspy vocals croon out a breathy growl over intricate guitars that dance and dash from a pensive, tinny twang to all out fire-storm flare, while the cymbal-rattled drum slams and wavy bass lines bring it back to those post-hardcore days of deeply tilling percussion, that dark, cloudy and cathartic aesthetic of howly-ballads, slicing into ya with low, burly-fuzz grooves and tight snare punches... This northern-metro-area rock outfit have their debut album coming out tomorrow...and it's a fine survey of hard-rock sensibilities, if a little weighty at points, shunting forth past the five minute mark more than a few times...but they make it worth it those subtle shades of dreamier space-rock ambiance, like the closing drifts of "I Hate Echoes."

Their release show is Jan 28th in the Crofoot's Vernor's Room. Take a listen:

They're backed by Crappy Future and My Pal Val.

~~...and, since, who knows when I'll be back to posting regularly...I think I'll plaster a few more digi-fliers of noteworthy shows below...~~ 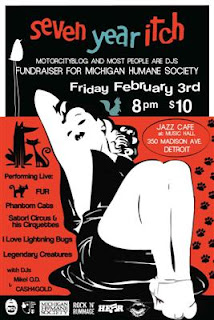 The first being this fundraiser for the Michigan Humane Society (hosted by MotorCityBlog and Most People Are DJs...the former is an assiduous local culture blog and the latter is, yes, also kind of a blog and culture reporting entity, but distinguished by its podcaster/videographer/documentarian Mikel O.D., who filmed the video of FUR -streaming below... FUR being one of the featured bands on this bill. (Others: Phantom Cats / Satori Circus and his Cirquettes / I Love Lightning Bugs / Legendary Creatures... 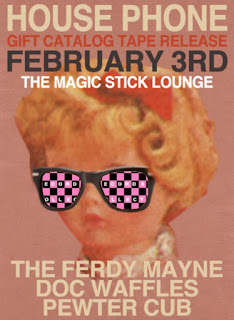 And then there's this show, which I already technically wrote about here.
Posted by jeff milo at 1:02 PM