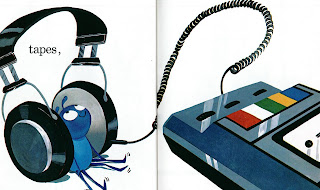 And House Phone's getting in on it - with their latest release packing their recently-online-streaming Gift Catalog EP. They're throwing a concert to boot, featuring an eclectic blend of dazzling/dreamy indie-rock (Pewter Cub), literary/antiquarian hip-hop (Doc Waffles) and psychedelic vaudevillian beat-folk freakouts (Ferdy Mayne)... indeed! Particularly eager to see where the Ferdy Mayne project goes next...having recently re-charged itself over the late Autumn...

anyhow - that show's Feb 3rd at the Magic Stick Lounge... (Check it out - you can hear a live recording, on that new tape, of House Phone covering "Dear, Prudence..." -followed by some light Max-Daley-heckling after the applause).

Ginkgo (over in Ypsi) is cranking some out pretty steadily...too...
...and Gold Tapes, here in Detroit...

And they keep coming... Heck, I just found a cassette in my car that singer/songwriter Justin Walker passed me a couple months back...early long lost demos, if you will, of what's now become Brilliant Violence.