I don't live in coffee shops... I'm not tied to my laptop, my ears aren't glued to my headphones... I don't spend every Saturday out at a bar...

It's not like I don't have a choice, not that I can't resist the warmth of the amps, the poignancy of the voice, the soft thump in my chest from those bass drums, pulling me...

...sometimes I choose to throw myself through it. Enjoy it, even. Whatever it is - it leads to more writing...
~


I was talking to a singer, to a writer... inside a coffee shop. I was asking about his band. This is what I do. And he told me that people might comment on the the vigor, the spirit, the spark, of his band's live performance.

Yeah, they, his band, bring all they can, when it comes to a live show, he said. But, actually, it was more that his band was just reacting to the pushed envelopes, broken tables, blown-out mics and messy aftermaths of other band's live performances.

One band gets a hang-glider... that means you gotta build a jetpack. It's a sweaty, somewhat aloof, maybe a smidgen self-deluded sort of pressure cooker we keep roiling-and-tumbling through together, up and over and on top of each other, off of each other and into...into new collaborations or repelling you back, from the stage and back into your abode, where you find yourself losing sleep again on an otherwise lazy Monday night, writing the next song... We're all mad here. 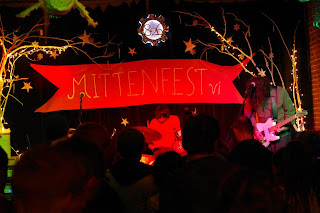 And then I start living in coffee shops and my ears get worn from the ear-buds, they ache for the proper headphones, they long for balance and for maximum volume. And I keep writing about all the bands that keep multiplying...

Each January I feel my muscles, my mind - screw up with self-imposed tension - appointing this year, the year before last, and last year too, and this brand new year - this year to be the year that I finally figure out how to properly tell the story of all the music around here...

But stories have to end. And how can their be finality when all these reactions keep firing off. Frontier Ruckus will have no idea how much they wound up inspiring a hip-hop MC, who, himself, would go on to inspire a psychedelic noise-pop performance artist, who then, also, by extension, leaves an impression upon me, when he falls on me, off the edge of the stage.


(whose ready for winter?)

Frontier Ruckus celebrate their sixth performance at Mittenfest this evening, (where said-MC saw them, years ago, back at the Elbow Room); they've played the Ypsi-based 826-Michigan-fundraising event each year of its existence.

Timothy Monger^ and the Great Lakes Myth Society sang about Heydays passing... Those warm, sonorous guitars, that quieting steady strum and that low, ruminative bass... and Monger's voice putting it perfectly about those naive days-gone-by, "back then that was enough..." before that guitar soars in with sad valiance only to wind out slowly, a stretched out sort of clarion call for scenesters.

And yet the scene keeps feeding upon itself. Some kind of late 50's monster movie that can't be stopped; a beautiful blob, or a some eerie reptilian replicant from a dimension that could never be fully described, located, babbling lyrical languages that shouldn't yet be deciphered.

"Some years from tomorrow..."

...I'll have lost my mind, or my will... I'll be dizzy from too much running or worn out from too much time spent listening (tapping, writing,...staring at this screen as the words lurch and spill forth...)

Some songs seem to capture it - sum it up and serve as the perfect rallying cry - or epitaph or maybe they're just pretty pieces of music, little time capsules to look back upon and marvel (or blush) at how weird, naive, noisy or inspiring we (you, rather) were...

To those who are still standing here...