I'm feeling it now... My hands want to come down on the keyboard like drum sticks... the ellipses ...necessarily...allow for me to pull away, to swivel around in this abominable office chair, cruel, cotton-upholstered maiden that it is...allowing me to jolt, to jitter to the beats... 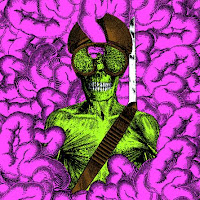 Bouncing and scraping off of bricks and chipped drywall, sommersaulting down puddled alleyways and into dank venues given waning iridescence from the red and yellow bulbs strung to the ceilings, those guitars like malignant motorboat-blades humming and churning, majestic and horrible, a metallic banshee's moan while the delirious clatter of the drums, the clenching, cardio-kicked hits, the splintered hickory...keep you juking, jolting, jittering...wanting to just bring meaty fists down onto the thin plastic rectangle in front of you....

And you find that point... Asdf Jfkl ...where the effect of music becomes inexpressible.

Today's sonic lunch is a sandwich of strange bedfellows...
it includes switching headphone-dips between what everyone in the indie-music world seemed all a flutter-for over the last month... i.e. Lana Del Rey (and her new album Born To Die) and what this humble music writer would offer in its place, for everyone in the indie-music world to go all a flutter-for, in the coming month... i.e. Thee Oh Sees (and their new album Carrion Crawler / The Dream...)

It was over before it began. I'm biased as I have a history with Thee Oh Sees, having started in on this San Fran collective's 15-year-canon about 5-ish years ago; Carrion/Dream is their 13th full length (flanked with more than a dozen EPs and 7" singles).

Rey, meanwhile, is little more to me than the bearer of the voice, a very beautiful voice, that has bewitched my friends with her grandiose/understated, elegant/everyday ballads about video games and mountain dew. I'm only slowly getting into her songs, orchestral and grand... symphonic strings and samples of fireworks opening into deep booming bass and sequenced drums setting their stylish slow-dance electronica groove and this not so girlish but not so womanly voice kisses and coos but also cuts and croons about new anti-excess anthems... It's dazzling, no doubt. But, at the end of the day, over-hyped?

For me, so far, this feels like a forced dress up, the eccentric indie-songstress framed by musical aesthetics most befitting an opera house, while still maintaining the hints of electro-pulsed, dark-ambient pop; not that it couldn't work, or grow into working, for me...but for now it's not sweeping me away. (That said, "Off To The Races," if a bit awkward in its first few spins, starts to grow on me as precosiu

Then again, reread the frantic and abstruse ramblings of the first two paragraphs and you can see what listening to Carrion has done to me, in just the first two spins... It's been a treat to see this band pinball its way through a bodacious haunted mansion's worth of rock n roll sensibilities, to gothic-psyche-folk, drone-drowned Brit-pop mutations, garage-torching indie-ballads...gangly, gnarly, weirdly valiant...

While Rey sings with an ever present heaviness, love "till the end of time" and "sleeping through the tears" and heart "breaks" with every step she "takes..." Thee Oh Sees main man John Dwyer caws out alluring and nightmarish imagery, that is, if you're able to decipher his heavily-echo-fuzzed vocals; in fact, he's often more inclined to just treat his voice like an instrument, an instrument he seems to take about as much care of as his guitar, erratically swerving it up into falsetto "whoops" and riffing it out for wordless "ah-ah ah, ah-ah ah," choruses, as though his buzzy bleat is just a throat-housed second guitar.

It wasn't a fair match up to begin with...

In any case...both of their respective albums are out this week and I advise you to listen to both.

But here's a point I wanted to get to... ...being curious about Chit Chat


An Ypsi-based band that I can't find a myspace or bandcamp link for... can you imagine? And the song someone sent me is an a file that doesn't agree with my dinosaur-desktop's Windows Media Player, so I have to wait for my lap-top to be rescued...

And so, yes, for those who want to sample from their desktops, their laptops or smart iDevices, you'll have to settle for this video from last week at Ann Arbor's Name Brand Tattoo parlor. The band put out their debut a little more than a month ago and it can be found via Cafe Ollie's Ypsi Music Shelf, among a few other endemically obscure outlets, as well, I'm sure.