Over here at Deep Cutz, we're sending out passive-aggressively threatening prayers to the almighty Voodoo God that he keeps the g'damned raindrops from falling this weekend - as the Blue Moon In June Part II is still on for this Saturday at the Contemporary Art Institute of Detroit.

The show (with 12 performing bands, Mick Bassett and the Marthas, Deastro, Duende, Pinkeye, Wildcatting, Woodman's Blue-Moonage Daydream, Red China, Dutch Pink, Stare Into The Sun, Drew Bardo, Satori Circus, Silverghost....) starts at 5:30 p.m., and--if you read the fliers--might only require a $2 donation at the door. It's all brought to you by Loco Gnosis productions, and a considerable helping hand from guitarist Ray Thompson-from one of Deep Cutz's favorites (and performing at the Blue Moon this year) The Oscillating Fan Club.

PR/OFC: Well, Oscillating has definitely been growing in anticipation and scope in terms of readying it's first self released LP and accumulating songs all the while. Summers here and with any luck, we'll be playing new tunes and sounds in new venues with cold beverages for all. 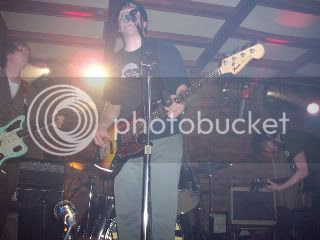 DC: what can you say about the upcoming LP, "Feverish Dreams as told by..."?

PR/OFC: The album has been a work in progress for quite some time but I think it was certainly worth the the wait. Quite a few numbers didn't make the cut and some were recorded, re-recorded and changed drastically, but in the end, at 16 tracks and 40 minutes I think we really distilled the essence of what we've been going after and all our best material on one piece of vynil. I'm quite pleased and I'm excited to watch it take its first steps. DC: what can you say about the last year for the band--in terms of favorite shows, what's changed-in approach, in writing, in live shows, in philosophy?

PR/OFC: This year has been a blast for the band including but not limited to : touchdowns, playing with many new bands and ever increasingly familiar faces, acquiring forbidden and taboo equipment and licensing new forms of voodoo in conjunction with old school sorcery. I feel as though the exponentially growing new material is somehow keeping with the original sound yet simpler and more direct in structure while being more varied and dare I say experimental in execution.

DC/MILO: how would you describe the essence of the blue moon in june festival?

PR/OFC: I think the blue moon in june is best described as a mysterious concoction of incredible music and bands and friends old and new celebrating Detroit and Summer the way it should be, with loud, psychedelic, garage-informed and just plain garage poppy rock. If you can dance and you like caterpillar-like fuzzy melodies, I think you could do a lot worse then check out the 12 great bands we have on display this year
Posted by jeff milo at 5:27 PM

Yay! Blue Moon!
Did you hear Duende on WDET this morning? There was a nice little plug for the festival!