Millions of Brazilians - Friday at the Lager House

Moving on from the still-heated discussion over the CAID-RAID..., we've got a great weekend of shows coming up here in Detroit.

Of course the Raconteurs are playing sold out show(s) this weekend at the Fillmore Theatre, but if you're looking for something a bit more intimate, a bit more heartfelt, and just as intense-- there's a spectacular line-up at the Lager House, featuring Stare Into The Sun, The Hadituptoheres, North Pilot (from Chicago), DJ Grand Dad Crunk and Deep Cutz' latest dig--the hard-shredding guitar-heavy post-punk rock of Millions of Brazilians.

Millions of Brazillians have a hard, booming sound, a rough, pushy rock and pop vibe pulling as much inspiration from Stevie Wonder as it does Fugazi. The trio, Nick and brothers Zoz and Derek, prove that power trios can exist without a bass player – and that it adds to versatility; says Zoz, “We found that working out the problems of not having [a bass player] made for a more interesting writing process,” adding that other influences include Marvin Gaye for Nick, Jonny Greenwood for Derek and Interpol for Zoz. Piston-pumping-percussions, a low buzzing, wide swaying guitar hooks like unforgiving rapids under a cutting-toned lead that shrieks and wails into beautifully caustic solos.

The band formed in summer 07, starting out “as a tongue and cheek type rock band” but soon becoming something more serious, if still freewheeling. Zoz and Derek had played in bands through high school but hadn’t yet collaborated with Nick.

The trio recorded an EP’s worth of material with exceptional aid of Eric Hoegemeyer at Tempermill and will record 3 more with The Clapp’s Daniel Johnson. They hope to have an EP in August. “Hopefully putting this in writing will hold us to it,” surmised Zoz. See them Friday at the Lager House.

dc: ...starting with, just how the band started?

zoz: the band came together late late last summer. it started out as a tongue and cheek type rock band w/ my brother singing. (derek and i have been in bands together since we were in high school, but we took about a 4 year hiatus until last summer.) my brother came to one practice and that was it. i had never really met nick before, we were always in the same place, but never really talked. anyway, he came in wearing an all white outfit, mustache and red headband. i knew we had something right there. we then didn't do anything until late fall, and pretty much played our first show after only a few practices. i think our first show at the lager we played 4 songs...maybe 5

dc: influences?
zoz: nicky sings a ton of falsetto stuff and derives a lot of it from motown: stevie wonder, al green, marvin gaye, etc...derek has always obsessed over johnny greenwood and the eels. the odd part is, we never wanted a bass player, we found that working out the problems of not having one made for a more interesting writing process...i bite a lot of my style from interpol, fugazi and bloc party. 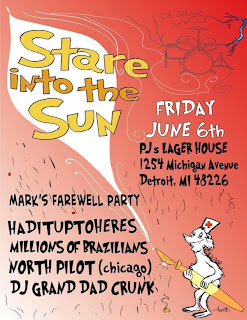 dc: where's the name come from?

zoz: honestly, i don't even know how i thought of the name. super drunk night w/ my brother patryk watching 3 sheets is all i recall.

dc: what's the scoop on recordings or future recordings?

zoz: we've recorded 5 songs at rustbelt, with eric hoegemeyer, who is so amazing. we are going to do 3 more with daniel johnson (the clapp) and we still have two more that we are working on. we hope to record the next batch of songs in early june.

zoz: future plans include buying a van and trailer in the upcoming weeks. getting t-shirts and album art done, recording the new tracks and getting the EP pressed. we're hoping to have an EP release by early august. hopefully, putting this in writing will hold us to it.
6/6 - Lager House
Posted by jeff milo at 8:58 PM