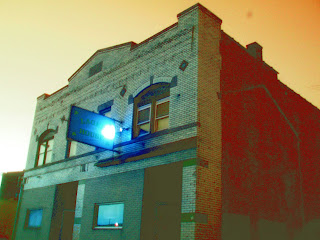 Deep Cutz: PJ's Lager House
Drive down to the bottom of Detroit’s spider-web, just a few blocks north of the river, westward down Michigan Avenue and you come to 1254 – the Lager House – currently known as PJ’s Lager House.

I was originally developing a monthly “Venue-Feature” for Deep Cutz in print, where I would simply bring you a bit more of an inside look to the places we’re all going to every weekend to hear loud music, drink copious amounts of beer and yell in each other’s ears. This one didn’t make it past the editors into print, but here’s a look at Mr. PJ Ryder himself, who bought the Lager House and, though the word “re-opened” isn’t entirely appropriate, he did some sort of re-type-job on it…a re-birth? Re-imagining? For starters, he cleaned it up, fixed the roof, re-painted it, took the carpeting out and got a new sound system (all with the help of friends and co-workers.)

The Lager House has a storied history and not just in local rock. (It was considered heir apparent--hot spot after the closing the legendary White-Stripes-stomping-ground: The Gold Dollar, and was the site of many a memorable line ups of its own.) But, since it opened 60 years ago (as a bar/restaurant), it’s been a haven for teamsters, a meeting place for union autoworkers, a hideout for JP Cavanaugh’s political cronies and the launch-pad for many Tigers fans pre-game traditions.

PJ Ryder ran a popular record store in Ann Arbor through the 80’s and up until the early 90’s, when he met his eventual-wife, Donna Terek. Fed up with commuting between Detroit and An Arbor, he gave up management of the record store (which is still there today) and wound up working in Real Estate through the late 90’s (which ended up working out prosperously for him, in terms of the considerably big deals he oversaw.) He bought a “complete wreck” of a house in Indian Village (that he eventually fixed up) where he still lives today.

Fed up with real estate, he decided what he really wanted to do with his life was run a rock n roll bar. So, after shopping around other venues, including Small’s, he bought the Lager House in 2007 and took over management (aided by Karen Davis) last autumn. “I always liked the place,” said PJ, “I liked the vibe, it was a little bit overly funky for my taste, but it was what it was…”

He also enlisted the help of Jeremy Cybulski (from the Beggars) and Carrie Hadler for promotion and booking. “I’m 54 years old and I was outta the music business for 10 years,” said PJ before chuckling, “also…I’m 54 years old! So Karen, who is in her early 30’s and Jeremy who is in his early 30’s and Carrie, she’s in her early 20’s, having some of those people around who should be a little more aware of who’s doing what [in the scene…]”

PJ exudes much gratitude for their help in keeping the music alive at this cherished dive – which, since their massive renovations is no longer a dive – and on top of that, the shows are free.

“First of all, the economy right now really sucks,” said PJ. “It’s like, if you know a band and you like ‘em, you haven’t seen ‘em in a while – you’re gonna say, ‘okay, I’ll pay $5, let’s go see ‘em. But if you don’t know a band, or if you know one band and don’t know the other 2, you might say to yourself, ‘gee, I could go someplace else and spend this money. I’m not paying cover for a band I don’t know.” Free shows = problem solved.

“The newer bands, what happens is that they see the huge increase in the number of people that comes to see them and they also see a significant increase in the amount of money that they make.” (roughly 20% of anybody buying a drink.)

For the record, however, higher profile bands, or perhaps some bigger touring bands, will have a charge at the door—simply for the sake of controlling potential sell-outs.

The name was changed, slightly, to PJ’s Lager House – simply to make it his own (and, to let it roll off the tongue a bit better.) PJ would never have dreamed of changing the name entirely: “You hear about this tradition…and you don’t want to throw this out.” 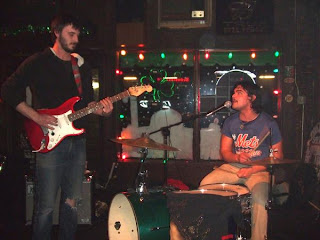 Millions of Brazilians
Posted by jeff milo at 3:56 PM